The Paramount Theatre of the Arts (Official) 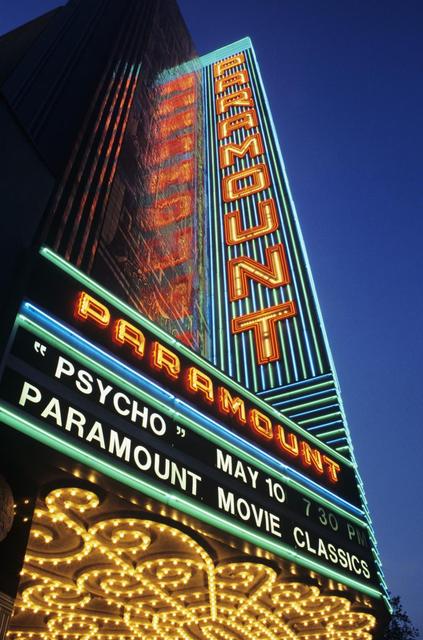 A truly magnificent example of Art Deco style beauty and construction, Oakland’s 3,476 seat Paramount Theatre is a marvellous counterpart to Radio City Music Hall, NYC in gilded glory. The Paramount Theatre was opened December 16, 1931 with Kay Francis in “The False Madonna”, a “Fox Movietone” newsreel, a Silly Symphony cartoon “The Spider and the Fly” and on the stage a 45-minute Fanchon & Marco revue “Slavique Idea”. Attending the opening were film-stars George Bancroft, Elissa Landi, John Boles, Francis Dee and John Breedon. It was equipped with a Wurlitzer 4 manual 20 ranks theatre organ. After operating for six months with a movie & stage show policy, it was closed for a year, reopening in May 1933, managed by Frank Burhans who had come from the Warfield Theatre, San Francisco. It was now purely a movie house. It was briefly taken over by the Nasser Bros. Theaters circuit, followed by Fox West Coast Theatres.

In 1953 it was equipped with CinemaScope to screen “The Robe” starring Richard Burton. The Wurlitzer organ had been little used after 1932, and was removed from the theatre in the late-1950’s. The Paramount Theatre was closed by National General Theatres on September 15, 1970 with The Beatles in “Let It Be”. It was then used for occasional movies. At the end of 1971 it was used as a location shoot for the movie “The Candidate”. In October 1972, it was purchased as a new home for the Oakland Symphony Orchestra. The final movie to play the Paramount Theatre was a matinee performance on December 19, 1972 of “Joy in the Morning” starring Richard Chamberlain.

Sadly in early-November 2021 it was announced that the Paramount Theatre’s regular classic movie screenings with the organ used as part of the program would be discontinued as they have become unviable. Films were presented on 35mm projectors, the theatre having not been equipped with digital projection.

Unlike the San Francisco Fox Theatre, this classic is still very much alive in the Bay area.

The Paramount Theatre was designated a National Historic Landmark in 1977.

I take it you are referring to the Paramount Theater tours.

For ONLY $3.00, on the first and third Saturdays, you get an cmplete tour of the Paramount. It lasts about two hours and you are shown
the entire theater. What a bargain!!!!!!

For $17.00 (according to the 2011 edition of the AAA New York tour guide book), you get a one-hour tour of the Radio City Music Hall.
That place is easily twice the size of the Paramount, and 1-hour hardly covers the place.

You won’t regret taking a tour of the Paramount. More than likely, you will want to take it again and again.

The tour of the paramount is well worth the $3. It’s nice to go there for a show (movies or live performance), but the in-depth information and time you get to spend with the theater on the tour is a real treat. The groups are small and you get to take your time appreciating all the details without having to navigate a crowd or hustle to your seat. The lounge areas adjacent to some of the rest-rooms are just as much of a treat as the auditorium. Going to the Paramount for any reason is like stepping into a time machine – highly recommended, and if you’re in the area you have no excuse NOT to see it.

I attended one of the showings of Abel Gance’s NAPOLEON in April of 2012 and was just blown away at how gorgeous the theater was and the quality of the projection work. Just a gorgeous theater and I am so glad I had the chance to see it in all its glory.

For many years the Paramount ran a classic movie series, and going to see a classic movie in this theater was like a step back in time to a wonderful and long lost era. Classics I saw here included Mr. Smith Goes to Washington, North by Northwest, Jason and Argonauts, and Giant. The mighty Wurlitzer played and it was an amazing experience. Much of downtown Oakland is heavy with Art Deco designed buildings, but this is the best. It is good that the downtown may finally be getting an infusion of money and interest to restore it to its past glory.

Good to know this theatre is being well maintained.

I worked at the Fox Paramount in the mid 60’s. The manager was Robert Apple, a great showman. This is were I saw my first CinemaScope® film in the early 50’s. They had many true studio sneak previews. I worked the time they showed the sneak preview of ‘Mollie Brow’ in 4 track mag stereo. When the movie was released at the Paramount later on they only sent a mono print. MR Apple was very upset I remember ‘Mollie’ had some great surround sound effects and the Paramount had plenty of surround speakers in the balcony also. So nice It’s still open and they do show movies once in a while. 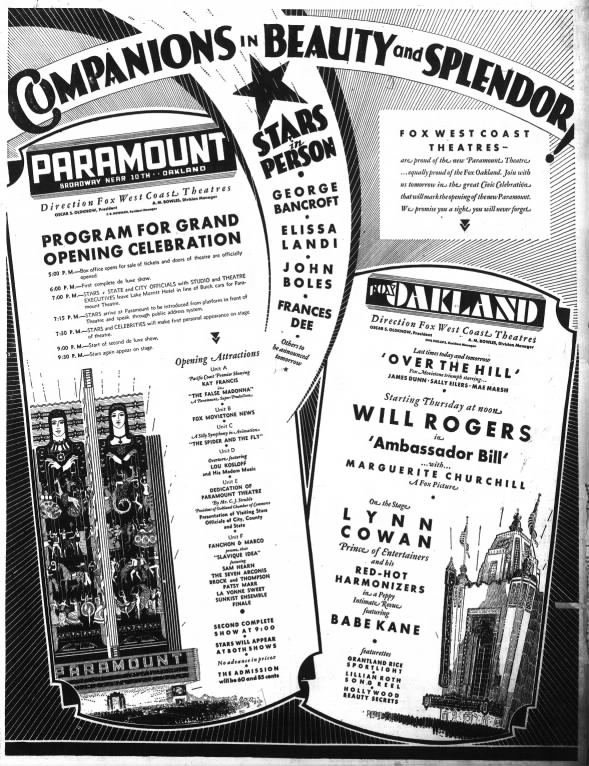 Charlie Chaplin’s classic “City Lights” will be screened at the Paramount on Feb 19,2022.