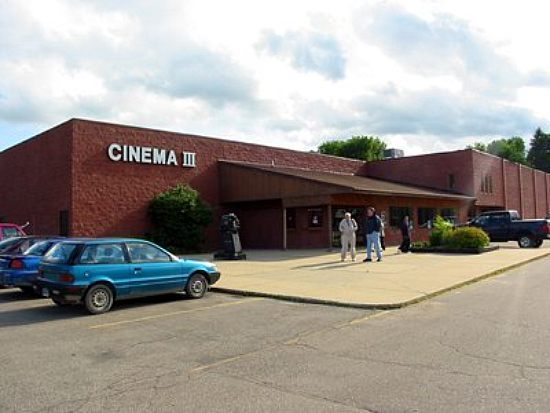 The Cinema III, first opened in 1980 and closed in 2007, has reopened in early-2009 under new ownership as the Imlay City Cinemas. The new owner Remo Querciagrossa, noticed the for sale sign while motorcycling riding. After buying the cinema, he replaced the roof, repainted the interior and upgraded the projection equipment. It was closed in August 2012. By 2019 it was in use as a church.

This theater closed in August, 2012. See this note, posted on the Big Screen Cinema Guide site.

Status should be changed to closed.

With 4 major studios signing a deal with Kodak to provide 35 mm films until 2015 I don’t see why it is such an issue for theaters to be in a rush to get digital.

But is the film being purchased for making prints or for origination media?

A news copy: August 29, 2012 IMLAY CITY — All has gone dark at the Cinema III, and not in anticipation of the showing of the theater’s next feature film. Business owner Remo Querciagrossa said a changing industry and escalating economic challenges have forced him to close the doors at the Cedar Street (M-53) location. Referring to the theater’s demise as a “perfect storm” of unfortunate circumstances, Querciagrossa said the tipping point came when he realized he could no longer rationalize the cost of doing business. Indeed, that cost will rise dramatically with the coming industrywide transition from 35 millimeter to digital technology. “All the (film rental) companies I deal with are requiring that we go to digital,” said Querciagrossa. “The contracts have to be signed by next month, with installation required by April 1, 2013.” Querciagrossa estimated he would need to spend about $250,000 to purchase and install the new equipment in his three theaters in Imlay City. Signs thanking customers for their patronage posted on doors of Cinema III. photo by Tom Wearing.
“I’ve exhausted my financial options,” he said. “With no guaranteed return on the investment, it just no longer makes financial sense to continue.” While financial realities play large in his decision to close the theater, Querciagrossa lays some of the blame on the film industry’s inability to make movies that attract large, broad-based audiences. “Other than the superhero and comic book films, the originality of the product coming out of Hollywood has suffered in recent years,” he said. “All they’re doing is remakes. The quality of films has diminished and attendance at movie theaters has followed suit.” Querciagrossa purchased the theater and building in late 2008, and opened for business in January 2009. His initial plan was to re-create the flavor of a small-town movie house, featuring first-run and classic movies at affordable prices to customers. He followed through on that premise by participating in the Downtown Development Authority’s ‘Winter Film Series,’ which offered free admission to classic and family-friendly movies on given nights during the winter months. Though moderately successful with the program, it and other promotions did not translate to consistently large crowds at the theater. Querciagrossa nevertheless expressed his appreciation for the support he and Cinema III received from its loyal core of regular patrons. “We had some good community support,” said Querciagrossa. “We want to thank all those regular customers for their loyalty and patronage. "I just wish that more people had taken advantage of the theater being here," he continued. "That might have justified our digital conversion cost.” The past aside, Querciagrossa is hopeful that someone with deeper pockets and a similar passion for movies, will purchase the building and reopen the theater. “My first choice is to sell to a larger theater operator,” he said, “someone who is in the position to make the transition to digital and be successful here in Imlay City.”

This theatre is now a church, called the “Heritage Church.”