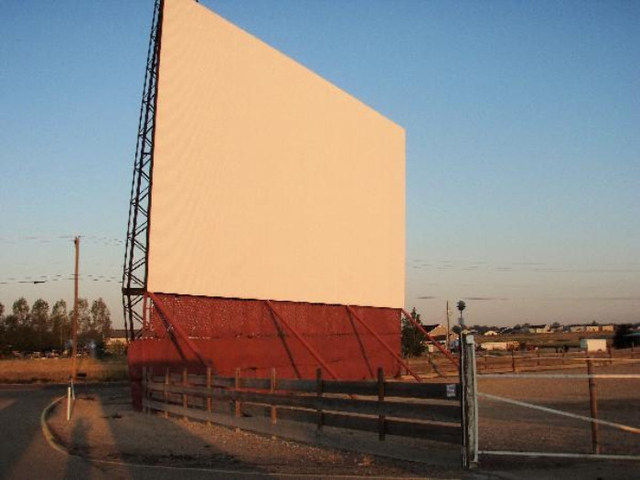 Apparently opened as the Chief Drive-In (although there is no mention of it in editions of Theatre Catalog). The Terrace Drive-In was opened March 18, 1952 with Tony Curtis in “The Prince Who Was a Thief” & Rory Calhoun in “Rogue River”. It was operated as a single screen 300-car capacity theatre by Virgil Odell. In 1984 two more screens were added. Car capacity is listed at 450. It is open from April thru November.

Taken over by Herold Theatres in 2016, only one screen is in operation, with plans to open a second screen in 2017.

The information in this header is not correct. I believe—though I’m not certain—that this drive-in was built with three screens, back in the ‘70s. But ever since I started attending in the mid-'90s, and probably long before that, only one of the screens has been in use, and the other two lots sit there vacant. I haven’t been up to Idaho yet this season but I don’t have any reason to believe they’ve started using either of the two idle screens again. It’s open weekends only, by the way, and shows second-run double features, just like the other area drive-in, the better known Parma Motor-Vu.

According to their web site they have made the conversion to digital projection.

The Terrace Drive-In debuted in the 1950’s. There was a fire in the 1980’s that did sginificant damage. It was closed for a while and sat in limbo. A woman reopened it but they are only using 1 screen.

This drive-in only has one screen in operation, Chris Willman is correct. I believe I’ve made 2 stops out here, in 2005 and again in ‘05.
There is nothing wrong with this drive-in, its a pretty good operation and in order. I just feel that the Parma Motor-Vu, about 20 minutes west is more charming and I tend to go there instead.

As of the 2016 season the management of the Terrace Drive In is now operated by Herold Theatres: http://www.heroldtheatres.net/.

One screen is in operation, but they plan to open a second screen in 2017.

In the video, Herold says:

Boxoffice, April 19, 1952: “CALDWELL, IDA. – Virgil Odell, former manager of the two Fox theatres in Nampa, has purchased the Chief Drive-In two miles east of here from Rex and Marjorie Moyle of Star. He will continue to operate the drive-in at Emmett which he bought two years ago. The Chief will be renamed the Terrace.”