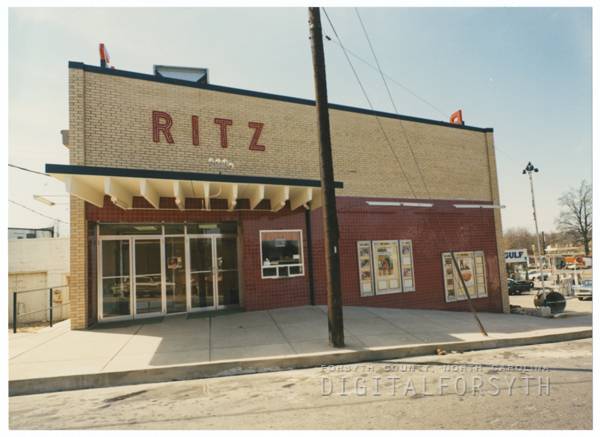 The Ritz Theater opened in 1968. The building still stands but is vacant.

Ritz is for sale for ~$65k. Looks like its still got all of the seating and basic amenities of a theater, but lots of upgrades needed, not to mention it’s in a terrible part of town. Here’s the listing link: http://www.trulia.com/property/3042992014-2014-Greenway-Ave-Winston-Salem-NC-27105#photo-6

I took the time to drive by the Ritz a week or so ago after work. It still pretty much looks exactly like the current Google Earth photo with the sign on one side still standing.

Unfortunately, this theater is located in a part of town that I honestly felt a little uncomfortable going to during the middle of the day. It’s a shame this part of the city hasn’t had some urban renewal efforts because it’s only about .25-.5 mile outside of the nice areas of downtown where so much is happening.

All of the buildings around it are caved in or razed now. The ones across the street are boarded up. I contacted the real estate agent for the property, as it is still for sale, and asked him a few questions. He didn’t know when it closed, but his personal opinion was that even though most everything (seating, etc) is still in the building, he things the structure is the only salvageable thing and all else needs to be gutted and replaced.

Downtown renewal is moving in that direction some, but so slowly that I have a feeling this theater will be demolished long before it has a chance to be revitalized.