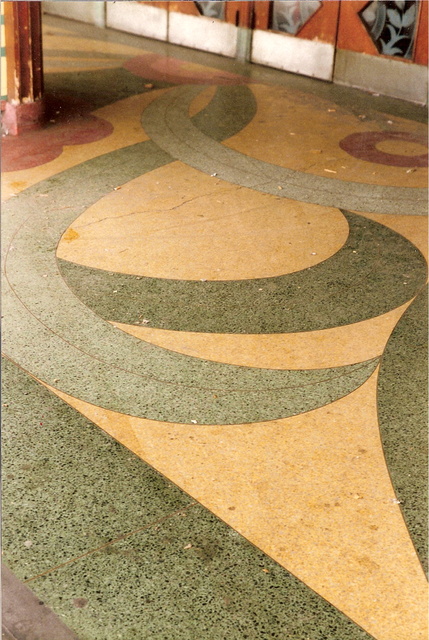 The Garden Theatre opened on June 22, 1949 and it’s name echoed the old term for San Jose as "The Garden City." The architect was Otto A. Deichman. It was operated for most of its life by General Theatrical as a first run house, and was very successful as the theater for San Jose’s Willow Glen neighborhood.

In the mid-1970’s, the Garden Theatre changed ownership and operated a policy of Spanish language movies. With the increasing gentrification of the neighborhood, this policy no longer was profitable and the theater closed in 1988.

Camera Cinemas, the local art house exhibitors, very much wanted to buy the Garden Theatre, with the idea of turning it into a triplex, while restoring it (the theater was almost totally unaltered).

This would likely have been a successful venture, but the owners wanted more money than Camera Cinemas could afford, and Camera Cinemas opted to acquire the Towne Theatre instead.

In 1989, the Garden Theatre was gutted to the bare walls, its auditorium chandeliers being allowed to crash to the floor. However, many of the human figures of its auditorium murals (the work of the Anthony B. Heinsbergen decorating company) were painted on canvas glued to the plaster. These were removed, as well as bas relief friezes in the lobby, and all of the etched glass doors.

The Garden Theatre’s facade survived the building’s conversion to an office/retail mall with marquee and vertical sign intact. The neon lights up every night.

I grew up in Willow Glen just a few short minutes from my favorite movie house in San Jose California. The Garden was wonderful in every aspect of its design. I remember seeing PT109 with LILLIES
OF THE FIELD on my 9th birthday at The Garden! They always ran double feature programs that included a cartoon and previews.
You always knew what opened every WEDNESDAY at THE GARDEN because
they changed shows weekly. The Garden always played the MGM
pictures exclusively in San Jose. Even when the Syufy Theatres
started their take over of the San Jose Market, they could not
prevent The Garden from playing Day and Date (at the same time)
with their new, giant dome theaters. The Garden always played
to big crowds and packed houses. The original owner, Ben Levin
of General Theatrical Theaters sold the house to a hispanic operator.

The neighborhood was upscale and classy – deserving of art and
foreign films or even First Run. As a local resident, Hispanic
movies never fit as the audience had to drive from the East Side
of San Jose to patronize this venue. But, money talks and that, I am sure made the decision for Mr. Levin to sell to the new owner.
I miss the place so so much.
There are times when I visit California that I buy a hamburger, fries
and shake and just park across the street from its facade and dream
of the early 60’s and my many bike rides to the Garden Theater.

I was in the Garden a few times as a kid. I remember the balcony especially, and the seats up there rocked! Literally! This was more luxurious than anything the downtown theatres could offer. I agree with Howie T that Spanish language films were a mismatch for this theatre, considering its location in a more upscale part of town, and the theatre itself being an anchor for the bustling Lincoln Avenue business district. I still do not understand why the people of Willow Glen, activists that so many of them are, could not prevent the destruction of this theatre down to a shell of its former self. This would have been a perfect venue for independent and art-house films and the yuppie types that live near it would have packed the place. I will never stop shaking my head over the loss of this theatre. I think it would have been a cinch to prevent, but nobody seemed to care. If the Fox/California could be saved in a downtown dead zone, then there’s no reason the Garden couldn’t have been saved in a thriving business district. Shame on all Willow Glen residents who sat by and let this happen.

Here is a current photo of the theater

I grew up in Willow Glen in the 60’s and 70’s and I vividly remember the Garden Theater on Lincoln Ave. where I spent many hours watching movies. I now live in NW Montana and our town has a one theater with a drop down movie screen that reminds me of the Garden, but not as fancy and 1/3rd the number of seats. I love to show moves in our little theater and I’m trying to build up enough of an audience to show classic movies regularly. I currently run a 4-day retro film festival here in October. The theater is mostly used for live theater, but there is a desire to show more movies. For me it’s all about reliving my childhood watching great old movies in a single screen theater.

I still dream of this beautiful theatre. We loved coming to movies here as children, it was such a treat and so beautiful! It breaks my heart that it was demolished and no one stepped in to preserve it.

The Garden was not demolished. It is still standing, just not used as a theatre any longer. It was converted into various retail space. Link below.