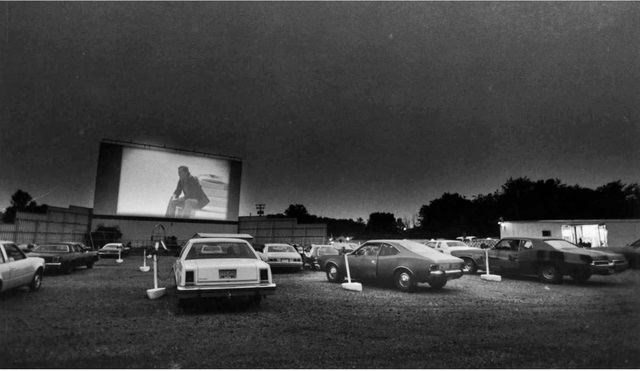 The Sawyerwood Drive-In opened April 1, 1948 with the 1947 Walt Disney animation comedy “Fun and Fancy-Free” with Edgar Bergen and Dinah Shore. The second feature was the 1946 western “Devil’s Playground” with William Boyd as Hopalong Cassidy. The new ozoner could park 600 cars along with RCA in-a-car speakers. It was opened by Philips Ramicone Sr. and James Ramicone. The Sawyerwood Drive-In reopened for the 1949 seaon as the Gala Drive-In. Philip Ramicone Sr. passed away on May 28, 1957. Apparently his sons did not want to operate the Gala Drive-In anymore, so it was sold. Nate and Sam Schultz, dba Fayso Theatres Inc. and Selected Theatres Inc. bought the Gala Drive-In on April 3, 1958. Into the 1960’s thru 1980’s Selected Theatres owned and operated most of the drive-in theatres in the Akron area. In the late-1980’s they sold all their drive-in properties and went out of business. On June 29, 1977, the drive-in had reopened as the Gala Twin Drive-In.

On March 6, 1986, Michael Krunich, dba Gala Drive-In Inc. bought the drive-in from Selected Theatres. Michael and his wife Mary Krunich had been leasing the drive-in from Selected Theatres for the past 10 years. In 1997, Krunich closed down the Gala Twin Drive-In for good at the end of the season. In January 1989, the property was sold. He is quoted as saying “it is sad, very sad because that was my life…but I’ve had two heart attacks, you know, and we’re in our golden age right now and we want to enjoy them”. Krunich was 64 years old. The Gala Twin Drive-In was demolished and new commercial buildings were built on it. The development is called ‘Gala Commons’ and its quite fitting.

This is the site today:
http://tinyurl.com/ldv5kh

It did park 475 cars and it was owned in the late 50’s by OHIO THEATRE SERVICE.

Interesting that the housing development kept the Gala Name.

It’s not a housing development but a commercial strip center. Several units for sale:

Thanks SiliconSam,but I think I will pass on buying a unit.Thanks for the info.

My Dad was the projectionist there for years. I miss going with him on Saturdays to fix speakers

I have many fond memories of this Drive-In theater. It was a real gem. Sorely missed. Wish I had a decent photo of the place. Would even purchase one.