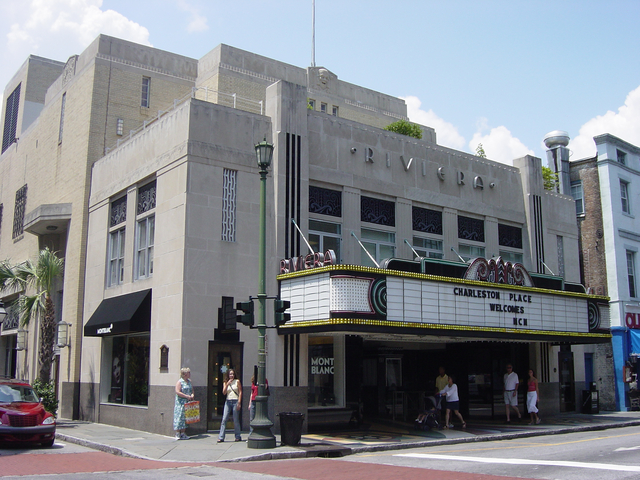 Listed on the National Registry of Historic Places, the Riviera Theater is a sublime example of the romantic Art Deco style. It opened on January 15, 1939 with Edmund Lowe in “Secrets of a Nurse”. Seating was provided for 789 in the orchestra level, 125 in the balcony, and 279 in the gallery (rear balcony for African Americans, who had their own separate entrance on Market Street).

This stunning theatre was the home of first run pictures, on its fifty foot screen, until it closed on September 5, 1977. The theater was leased to a church group in 1979 and, by the mid-1980’s, threatened with demolition.

The Friends of the Riviera protected the theater and it was eventually sold to the Charleston Place Hotel (which is located next door).

The hotel restored the entire theater, but removed the seats in order to create a conference center and ballroom.

Sorry about the duplicate post as I got impatient, again.

I was just in Charleston for SPOLETO (last week of May) and stopped by (while riding my bike) to look at/admire the theater for 30 minutes or so. While I have viewed the facade of this theater for decades (since the late 50s when I began regularly patronizing the theater) I have never seen a closeup of the “face”. Amazing how he can look at something for hours, days, decades and not see everything (kind of like a movie). Thanks for sharing!

How did a closeup of that face get to be photographed…from what level or location?

Lost Memory: Couldn’t view the photo when clicking on the word HERE.

What an art deco facade!

I am looking for the documentation of the Riviera Theatre being on the National Register. I do not think that it is individually listed, perhaps it is in the Charleston Historic District. Does anyone have any more information of this?

Also, is anyone familiar with a previous member of the “Friends of the Riviera”?

If you look at the “august 2008” pic, you’ll see a plaque on the left-hand side of the building. It’s about a theater that was on the site earlier, a vaudeville house I believe was called the Academy of Music.

Also, you’ll see a side entrance. That’s where the blacks would enter during the Jim Crow era. I happened to walk by that theater in the early 80s when someone had left the door unlocked. I walked around the empty theater. The Jim Crow box office was still there, along with advertising from the 1950s. The smoking gallery had an intricate pattern rug that appeared to be from the 1930s. I locked up when I left.

The smoking gallery had been closed for years. I used to go there quite often as a child. It was part of a chain called Pastime Amusement Company, which also owned the larger Gloria and the smaller and older Garden. They also had a tiny theater called the Arcade. At one point a church operated out of there, I believe. It was also a rep house in the mid-80s.

Charles Benton the architect of the Riviera, may have also designed the Strand theater in MArietta GA which opened in 1935, in looking at photographs of both theaters there a numerous details that are basically the same in both theaters, The Strand looks to be an earlier and less costly version of the Riviera.
The Strand has been reopened but it was not a restoration back to the original.

The “sister” theater to this one is the Rogers Theatre in Shelby NC. Owner, Gary Kulas is restoring it. www.rogerstheatershelby.com