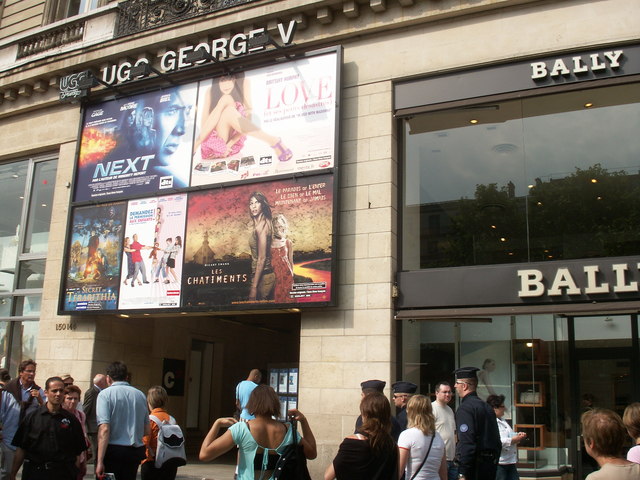 Located at the top end of the Avenue des Champs-Elysees at number 146, close to the Arc de Triumphe. The Portiques Cinema opened on 26th October 1938 with the Argentinian film "Nuits d'Andalousie", and it had 400 seats in its single auditorium. It was renovated and enlarged, reopening on 24th August 1951, gaining luxurious marble fittings, gildings and a new name George V. The British king’s crown was reproduced on all the hangings. In 1955 the auditorium was remodelled to the plans of architect George Peynet and it contained 500-seats. It re-opened on 15th June 1955 with Jean Renoir’s “French Cancan”.

One of the longest presentations at the George V was "West Side Story" which had a run of 4 years, 8 months and 10 days (218 weeks) beginning on 2nd March 1962. The film was presented in Panovision 70mm. The film was then transferred to the Avenue on the Champs Elysees for 25 weeks, then transferred to the Arleqine for a further 16 weeks. The cinema was THX certified in 1987.

In 1984, five extra screens were added in the building next door at number 144 Champs-Elysees named the Pergola. In recent years another three screens have been added to this section of the cinema, making the entire complex of 11 screens. The Pergola building now hosts screen 2 which have a seating capacity of 400, and also located there are screens 3, 4, 5, 6, 7, 8 and 11. Screen 3 has 170 seats, while the others vary around 65 to 95 seats each.

The UGC chain took over the George V in 1992, and it was re-named UGC George V. Screening first run movies, they are usually in their original language versions.

Closed, along with all other cinemas due to the Covid-19 Pandemic on 15th March 2020, on 2nd June 2020 it was announced the lease would not be renewed and the cinema would be closed permanently.

A photograph of the entrance at number 144 Champs-Elysees, not the original entrance:
View link

The seven “Pergola” screens opened early 1984, well before UGC’s arrival. The largest auditorium, very nice by that time’s standards, is where I saw “Rumble Fish” (“Rusty James” in French!) the week after the opening week I believe.

Remember this as a pretty grand experience for Billy Wilder’s The Private Life of Sherlock Holmes…as a multiplex the main room is ok, the smaller screens can be hit or miss…in the past couple of years have seen American Gangster, Bee Movie, The Incredibles, Haunted Mansion, a Sidney Lumet with Vin Diesel, and a French picture there

The landlords see a hotel in the space’s future…not surprising the neigbourhood and the attraction for tourists…Heartbreaking that there will only be 5 theatres left on the Champs and side streets which once had 40 – the mainstream UGC Normandie in the middle and Gaumont at the Concorde end of the Champs, the Publicis near the Arc de Triomphe (which can probably accomodate one more screen and table service) & the arty Balzac and Lincoln

Still this had a great great run including the most screens on the Champs (almost always something worth seeing) 82 years!

English translation of an article on the Silverscreens French site, from 1998.

Another article, in French, on the George V.