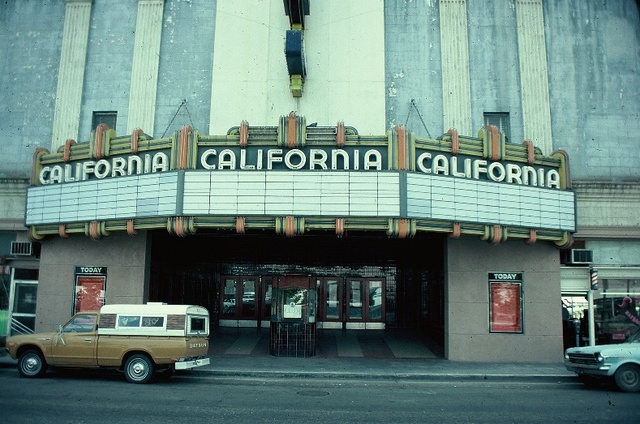 Here is part of a January 2000 article in the LA Times:

These Sunday columns that harken to days gone by are never long enough for the nostalgiacs (Yes, I made up that word; don’t write me) among us. For example, last Sunday’s piece, about theaters that have come and gone, left no room to talk about the California Theater’s magnificent organ, the Wurlitzer Hope-Jones Unit Orchestra Style D.

By coincidence, we have news of that Wurlitzer this week. Santa Rosa resident Jeff Morse, one of a multitude who grew up in the old Cal, did some research to find out what happened to the organ. There are a lot of coincidences in what Jeff found.

This old beauty, installed in 1923, when the California was opened (as the G&S Theater), had been well maintained in its 54 years in Santa Rosa, the last years by organist Jack Bethards, who presided over its last great Santa Rosa concert, in 1975, as an accompaniment for a special showing of the silent film “Phantom of the Opera.”

So, when it was decreed that the California would be demolished to make way for Macy’s in 1977, the Wurlitzer brought $8,000 from a wealthy San Diego man, a collector, who donated it to a theater in San Diego. The name of the theater (coincidence #2; the timing of Jeff’s note, as I was preparing to write the Sunday column, being #1) was the California.

“I always thought it was rather nice,” wrote Morse, “that while our California Theater was only a memory, the heart of our theater was still alive, thrilling new audiences.”

But, when Jeff contacted John Dapolito from the San Diego chapter of the American Theater Organ Society, he learned that the Wurlitzer had been removed from San Diego’s California Theater in 1987 and placed in storage. In 1995, after several unsuccessful attempts to find a home for it in a theater, it was installed in a church. Seven months after it was in place, it was destroyed in an arson fire.

Dapolito then delivered to Morse the news that constitutes coincidence #3. “The California Theater,” wrote the San Diegan, “has been condemned. The building is still there, all boarded up and in a bad state of disrepair.”

Kind of makes you wonder if that Wurlitzer was a jinx, doesn’t it?

I am the Jeff Morse named in the above article. The California Theater sadly closed in 1977 and demolished not long after. It was built in the late 20’s under another name, the G & S, but was named the California by the 1930’s. It was built not only for films but for vaudeville as well and had a functional stage, dressing rooms, and an orchestra pit. Its a a shame city planners didn’t see the possibilities, it would have made a wonderful performing arts venue downtown, something that Santa Rosa sorely lacks. The interior was richly decorated in what I suppose could be called 1920’s chinoiserie with murals of Chinese peasant life. An interesting footnote- Nathalie Wood, a Santa Rosa native was introduced to films in this theater and knew it well in her childhood. On the site of the theater is a garage for the downtown mall. Thank you very much for the photos! I’ve never seen them before. It brought back many fine memories. Jeffrey Morse moravocis at sign mac.com

Here is an item from the January 5, 1924, issue of Exhibitors Herald:

“The new G. & S. theatre was opened last week at Santa Rosa and is managed by T. C. Reavis, who also owns the Cline and Rosa of the same city. This house, it is said, cost $250,000 and seats 2000. The policy calls for feature pictures, vaudeville and road attractions.”

A September 11, 1977, article by Gaye LeBaron in the Santa Rosa Press Democrat says that the G & S Theatre was both designed and built by local contractor Albert M. Hildebrandt. The owners of the building, John Greeott and Eligio Strobino, leased the theater to an experienced theater man, Thomas G. Reaves.

The first show at the new house was a production of the Broadway musical Blossom Time, and the first movie shown was Lon Chaney’s version of The Hunchback of Notre Dame. The house was also on the Pantages vaudeville circuit in its early years.

This photo dated 1928 shows the name California Theatre on the vertical sign, but it looks like G & S Theatre might still be on the front of the marquee (it’s a bit blurry.)

I am writing an historical performance piece for the Lamplight performances at the rural cemetery in Santa Rosa based on the Cal theatre and vaudeville. Do any of you know someone who is of the right age to have attended vaudeville there in the 30’s who could be buried in the old, historic cemetery on Franklin?

This may not be what you are looking for in your writing, but you may still find it interesting to read.

Back in 1973 I worked at the California Theater as an Usherette. At that time we had a well dressed regular customer by the name of Willie Williams. He was a small framed black man about 5'3" tall, and looked to be about 70-80 years old. He was allowed to walk into the theater anytime he desired and was always given free popcorn and a drink. He was allowed these amenities because he and his wife (at this time deceased)were regulars from the first Grand Opening of the California Theater. When I learned this about him, I began asking him questions about his history with the theater. He told me about the old modeled cars parked across the street from the movie house, how everyone who came dressed up in their best clothes, and how theater doormen stood at each door in their (red?) uniforms with (gold colored?) tassels on their shoulders in order to open the doors for each customer. He also talked about how exciting it was to attend the theater, and the many vaudeville shows & actors he and his wife saw over the years.

As one of many young employees in 1973 we used the theater as a party room on holidays and played the old organ for music. We girls dressed in white nurse’s uniforms and shoes. The boys dressed in dark slacks, dress shirts, and ties. We were required to get to work 15 minutes early and use the upstairs dressing rooms in order to change our clothes.

When a new employee was hired, he or she was always initiated in the same manner. Once the “newby” was in uniform and left the dressing room, their street clothes were snuck out and carefully placed on the movie stage. Once that employee finished his or her shift, they went back to the dressing room to find their clothes missing! At this point they were usually upset, but told they could get them back. Then they were instructed to go out on to the upstairs balcony and look down in front of the movie screen. I can still remember the shock I felt when I saw my clothes neatly laid out in the flickering movie light in front of hundreds of people! The only way to get them back was to either wait until the movie ended or go back stage and carefully reach for them from under the movie curtain without being seen by the audience!

Most movie goers were unaware of this crazy activity because they were so distracted by what was on the screen. However, our friendly projector man usually saw everything from that huge box in the back, where he spent all day looking out to make sure everyone was enjoying the picture show.