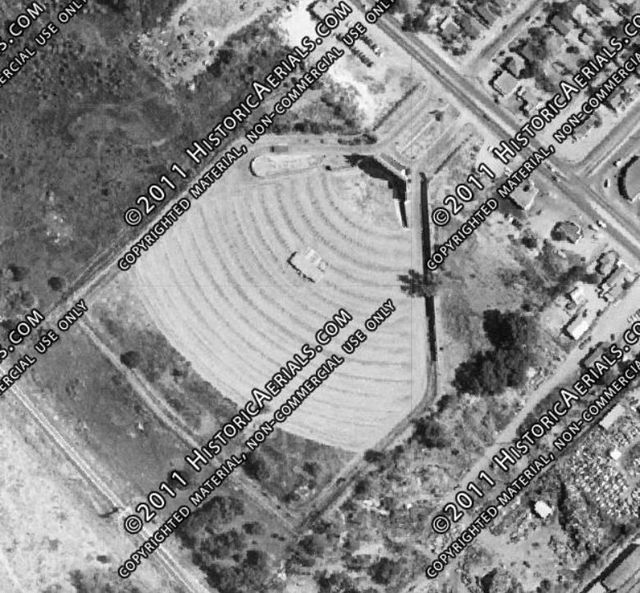 The Cinderella Drive-In was opened on December 16, 1950 with Gordon McRea in “Return of the Frontiersman”. It was taken over by the McLendon Theatres chain and renamed King Drive-In from July 29, 1970.

Well, the CINDERELLA/ KING DRIVE-In parked 900 cars and was owned by Virble post.This in the late 50’s,guys.

Thanks for the info Mike.

Sam, that other drive-in was the Starlite, billed on the screen tower as “Southwest’s Finest For Colored Americans.”

Billy, Billy, or Don – if the King was a twin, where was the second screen?

Status of this theatre should be changed to “closed/demolished.”

This Drive In was Twinned sometime between 1972 & 1979. The original screens backside faced Lamar. When you drove in, the 2nd screen was on the back, right side of the field. Wonder if this was done when the Starlite was either failing in business or closed…

The original Grand Opening for the Cinderella Drive-In was held December 16, 1950. It was the last of the Dallas' area drive-ins to open in the year 1950. The boom year saw the opening of the Hines Blvd. D-I, Jefferson D-I, Hampton Road D-I, South Loop D-I, Garland Road D-I, Denton Road D-I and – just four days earlier – the Samuell Boulevard D-I. At the Cinderella, the kids got free Lash LaRue comic books and they opened with “Return of the Frontiersman.” They say that they had 2,000 parking spaces and sported a five-story high theater. Another pledge was to be a family friendly drive-in. While it didn’t end that way for the Cinderella when it became the King, the original owners stuck to that business plan.

The Cinderella did play its first world premiere film in 1952 with the exploitation Tower Films' release, “Teen-age Menace.” New owners Ed Bowen and Ted Lewis took on the theater in January of 1958 equipping the Cinderella with its 50x100 panoramic screen with relatively new speakers and had a grand re-opening of the “new” Cinderella with “Baby Face Nelson,” “Running Target,” and “Gun Glory.” Appears as though new owners were in place in March of 1959. The theater closes in the 1960s as the neighboring Starlite, an African American drive-in, just continued to draw audiences.

The Cinderella would go after the Starlite audience relaunching as the King Drive-In and is taken on by the McLendon circuit re-opening July 29, 1970 with Jim Brown’s “The Grasshopper.“ McLendon dropped the King after a Dec. 1975 double-feature of “TNT Jackson” and “The Big Bird Cage.” It becomes an independent who adds a second screen and transforms from Blaxploitation to an adult theater at its end. The King would be abdicated with its closure and demolition.