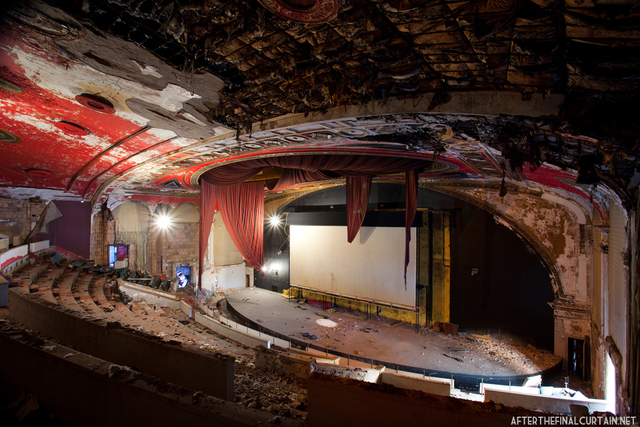 Jacob Fabian, who’d introduced Passaic County’s first facility built exclusively for the exhibition of moving pictures in 1914 (Passaic’s Regent Theatre), opened the Fabian Theatre December 15, 1925 with a showing of the silent feature, “We Moderns” starring Coleen More. The theatre was built at a site ravaged by the Silk City’s great fire of 1902.

The Fabian Theatre, designed by architect Fred Wesley Wentworth in the Sullivanesque style, was originally envisioned as a stand-alone theatre, and the large office building and the Alexander Hamilton Hotel which enclose it were added as afterthoughts.

The theatre featured the Fabian Mammoth Organ (a Wurlitzer), played by Warren Yates, who’d previously served as Chief Organist at Newark’s Wentworth-designed Branford Theatre. (Yates was the last organist recorded by the Phonograph Division of Thomas A. Edison Inc. The recordings were made at the Fabian Theatre on 9/26/29 and 10/3/29, just weeks before the company went out of business. Records were manufactured but never released.) The facility also featured a 500-bulb, two-ton chandelier, murals, tile floors, performances by the Fabian Grand Orchestra, and Turkish baths in the basement.

In addition to featuring films and vaudeville, the theatre, which maintained its single screen and 3,000+ seats until the mid-1970’s, was site of several Abbott and Costello film premieres. Among these were 1940’s “One Night in the Tropics”, 1950’s “Abbott and Costello in the Foreign Legion”, and their first color feature, 1952’s “Jack and the Beanstalk”. Allegedly Lou Costello, a Paterson native, had demanded that Universal Pictures provide the ‘hometown premieres’ of the two earlier films.

Also of note, in 1948, the Reverend Charles Tarter, a civil rights pioneer and charter member of the Paterson NAACP, broke the theatre’s color barrier when he repeatedly took a seat in the building’s first floor lobby, rather than acquiesce to the facility’s rule that blacks were only permitted to sit upstairs.

In 1962 it underwent an extensive remodel to the plans of Paterson based architect Sidney Schenker. the 1970’s and 1980’s, the theatre was multiplexed with, first, the main level being twinned and the balcony being turned into its own auditorium and, later, the addition of two screens on the stage. Despite these last gasp efforts, as well as a brief return to its former glory when it hosted the 1989 premiere of “Lean on Me”, the story of Paterson high school principal Joe Clark, the Fabian Theatre closed in 1993 after a screening of “RoboCop 3”.

In January 2004, the state’s Department of Environmental Protection approved the demolition of the theatre. The owner/developer is now required to provide Historic American Buildings Survey-level documentation, an archival record, and a museum-quality interpretive exhibit documenting the theatre’s history to the Department’s Historic Preservation Office.

The theatre site has long been intended to house new office space and parking for the Paterson Board of Education. Recent reports of severe mismanagement of funds cast doubt upon this scenario and the state’s Department of Education will review the true costs of such a plan and investigate alternative sites. Preservation and restoration of the Fabian Theatre was still possible until 2012, when the interior of the theatre was stripped back to its brick walls. As of 2021, the theatre is vacant.

Tinseltoes, I don’t see any of these green underlined words. Ed Solero, you are right, that is an odd entrance. Someone else would have to say if that is the original one or not, but doesn’t the Fabian only now the upper balcony part of the theater with a fake ceiling put through the orchestra level? With the orchestra level converted to some other use? That could also mean that those “other use” entrances are from the original theater entrance and the “theater” using the balcony (at least when it was open yet) using a different entrance.

For more information on Jacob Fabian and the architect Fred Wesley Wentworth, see www.fredwesleywentworth.com I have recently completed a book on their collaboration.

I photographed the Fabian Theatre a few years ago. Check out my post at After the Final Curtain

What a shame this is rotting away like this. You look at Matt Lambros photos and you wonder if it could ever be restored.

It’s been gutted since I photographed it, Mark. There really isn’t anything left to restore.

This theater isn’t like the Fabian of recent times. 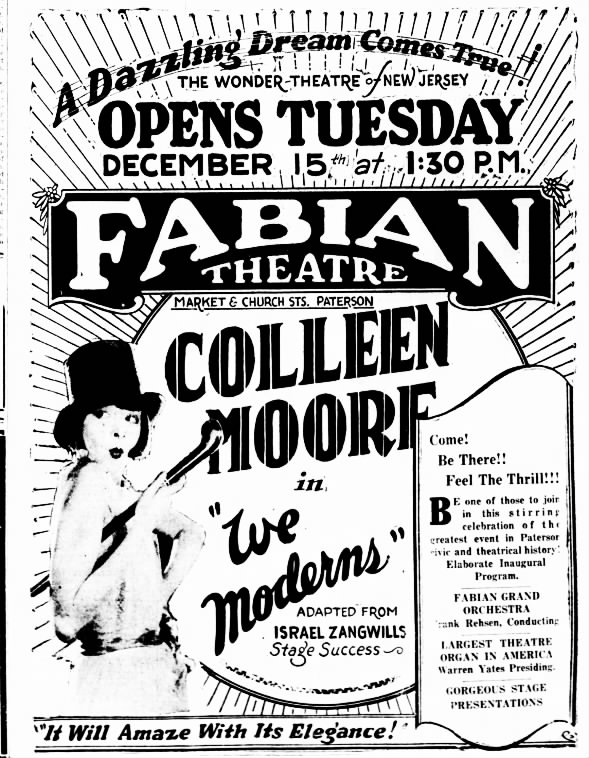 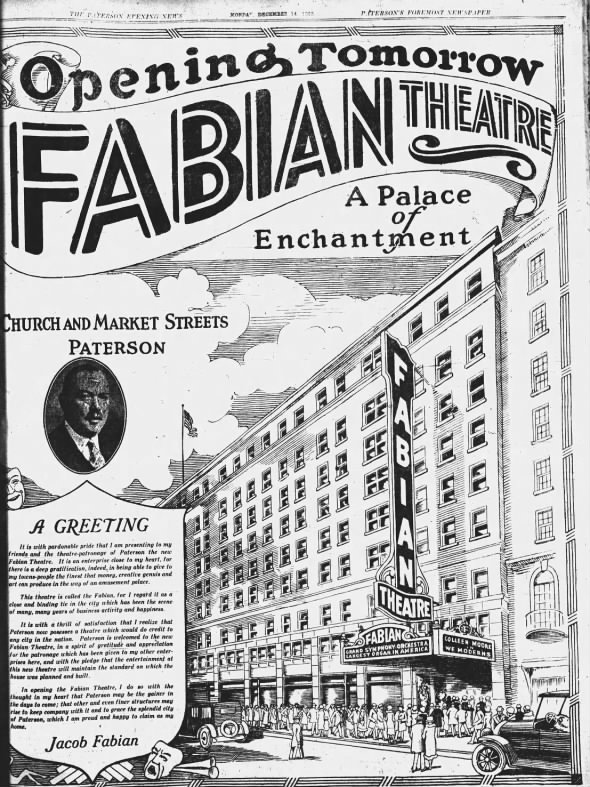 An extensive remodeling of the Fabian Theatre took place in 1962, featured in a two-page article in the August 15 issue of Motion Picture Exhibitor. A reseating reduced the capacity of the house by about 600, ornate decoration was removed or covered, the house was recarpeted and repainted, a new marquee was installed, and the restrooms and lounges updated. The original auditorium chandelier was removed. A new screen 52x26 feet was installed, along with new projectors and a modern sound system. In a nod to the old days, the Wurlitzer Hope-Jones organ was refurbished and was featured at the reopening of the house. Plans for the project were by Paterson architect Sidney Schenker.