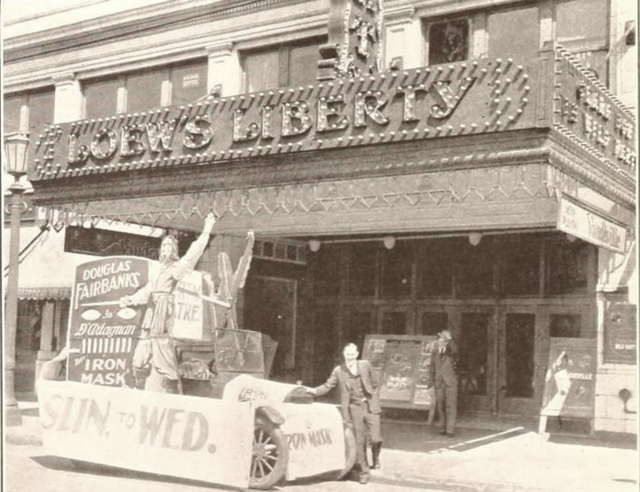 The Loew’s Liberty Theater was opened September 6, 1915 with Enid Bennett in “Stepping Out” plus 6 acts of vaudeville on the stage. In 1929 a Wurlitzer organ was installed. The Liberty Theater is still listed in the 1957 Film Daily Yearbook.

My brothers and I went to this the Liberty Theater almost very weekend during the 50’s. Admission waes 20 cents! We would always sit up front with our popcorn, Milk Duds and a pop.

The opening ad rivest266 linked to shows that the Liberty Theatre was in operation in 1919, but it was probably the same house that was mentioned in the July 15, 1916, issue of The Moving Picture World, which mentions the “…Liberty Theater… built a year ago, and seating 1,500.”

I’ve also found a few references from 1916 to a house called the Manhattan Theatre located at Superior Avenue and 105th Street. One reference indicates that the Manhattan Theatre was valued at $65,000, so it must have been a fairly large house. It’s hard to believe that this now rather forlorn intersection once hosted two big theaters.

My father in the late 1920’s performed with several of his January 1928 East Technical High School classmates on the stage when the Liberty had amatuer vaudeville nights. He always spoke highly of the Liberty though I was never in the theatre. We used to drive by it when I was a kid with my father talking of those great days. I think he may have also ushered there when he was in high school. So great to see the other comments about the Liberty.

Grand opening announcement in the photo section for this cinema.

A picture from July 1973: https://commons.wikimedia.org/wiki/File:VACANT_BUILDING_AT_EAST_103RD_STREET_HAS_BEEN_VANDALIZED_AND_STRIPPED_WHILE_LITIGATION_OVER_URBAN_RENEWAL_OF_THE_SITE…–NARA–550140.tif

AndreasP’s link doesn’t work for me, but I did find this photo which might be the same one.