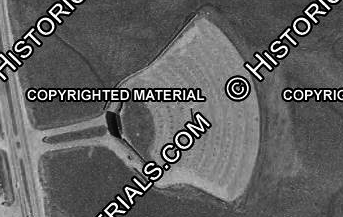 The McKinney Drive-In was a Rowley United Ct. project which opened on July 7, 1950 with Yvonne De Carlo in “The Gal Who Took the West”. It was closed in mid-1974.

The Address Is Incorrect. According To The May 30th, 1951 Aerial, The McKinney Drive-In Was Located Between Highway 75 And Not Too Far From The Former Highway 24, Now Route 380.

Approximate address is Metro Park Dr & N McDonald St, McKinney. This end of Metro Park Dr was the entrance/exit road for the drive-in.

Oh. Now I Get It. Thanks! Do You Know More Or Have More Information About The McKinney Drive-In?

Formerly, John Allen Summers Of Stratford, Oklahoma (September 28, 1922-February 4, 1971) Is A Former World War II Veteran That Served In The Air Force, And Formerly Worked At The McKinney Drive-In As A Projectionist (Back When The McKinney Drive-In Screened Second-Run Films Until The Mid-1960’s) And Later Employed Himself At A Fort Worth Drive-In 60+ Miles Away.

Former Plumbing Inspector Ben Winston Is Also A Former Employee Of The McKinney Drive-In Since 1953.

On August 11, 1967, No Damage Was Reported To The Theater After A Grass Fire Broke Nearby It.

The Original Owner Roy L. Brockman Died In March 1957, In Which The Theater Was Later Taken Over By His Son Roy E. Brockman.