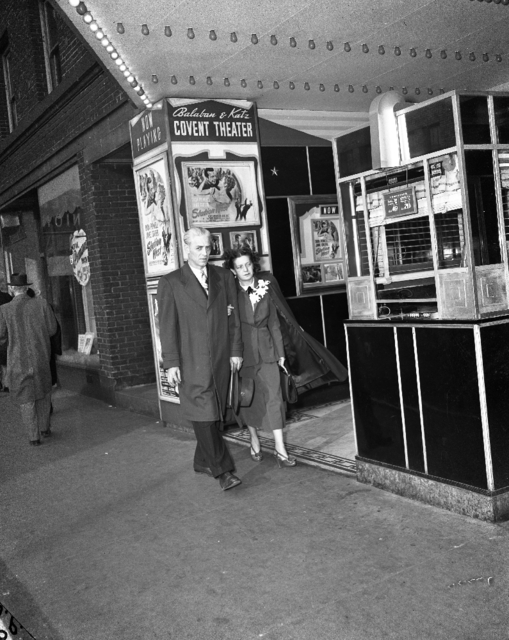 The Covent Garden Theater, opened in June 1916 for the Lubliner & Trinz circuit, could originally seat 2,684, and was one of the largest theaters in the Lake View neighborhood of Chicago. It featured vaudeville and stage shows as well as motion pictures. The theater was taken over by the Balaban & Katz chain on December 22, 1932 and was renamed Covent Theatre. It was remodeled in 1934 by the firm of Pereira & Pereira.

The theater was part of a complex which also included the Hotel Covent, or Covent Hotel. It was closed in 1958. When the theater was demolished, only the auditorium was razed, replaced by a parking lot. The hotel remains today.

CT wonders never cease. I had no idea that this hotel was ever part of a theater. I was at a giant garage sale in this very rear parking lot in the early `80’s.
You entered through the tunnel/Clark St. entrance under the hotel. You could tell by the design that something odd had been done. Dumpsters lined the tunnel.
There was a guard rail across the back of the lot, that people from the alley and the then Post Office next door stepped over to access the sale. The alley behind was almost like a street. And about as wide as the side street were around there.

I also moved someone into that hotel about 5-6 years ago. The interior was like something out of “Paper Moon” or “The Sting”. There was a stairwell office with a glass partition that the on-duty hotel staff sat in/behind.
The tall hallways were old hardwood with carpet runners up the centers. The rooms all had operational transom windows above each door. The rooms however were all of about 8 feet wide by 10 feet deep, if that. An old metal frame bed & waterfall dresser were included. The window overlooked the rear lot.

The Post Office next door has since closed to the public, but is maintained as a sorting station. Next to that going South is a twice built McDonald’s with drive thru. Next to that is a condo building that replaced the Playdium Bowling Alley. Where my grandfather sanded the lanes in the 60's. It was open into the70’s.

The principals of Pereira & Pereira, the firm that did the 1934 remodeling of the Covent Theatre, were William Pereira and Hal Pereira. Percival Pereira was an older architect who was never a member of this firm.

These old Chicago hotels have been rapidly going away over the last fifteen years. My guess is the Covent building will soon either be renovated or demolished.

Other articles describe the technical achievements of the Covent Garden. The balcony was noted as requiring no sight-obstructing pillars, making it one of the earlier cantilevered balconies. The capacity was 2,684, making it one of the earliest huge theaters outside the Loop. The stage was designed to hydraulically “split and raise like a jack-knife bridge revealing a broad and deep pool for the water acts. The mechanics of this arrangement, said to be more complete than that of the New York Hippodrome, was the cause of the delayed opening.” The screen drop was painted to imitate a gigantic lady’s handkerchief.

“The stage is of proportions adequate for circus performances, winter carnivals and the largest of grand opera and musical comedy spectacles. A huge water stage, patterned on the lines of the one installed at the New York Hippodrome, is included in the stage equipment for spectacular water effects. A Wurlitzer Hope-Jones orchestral organ, installed at a cost of nearly $75,000, and said to be the largest of its kind in the world with more than 2000 pipes and attachments, will be used exclusively for the interpretation of scores for the musical plays as well as for solo purposes.”

However, the programming was a bust and within two months, after experimenting with combined revues and vaudeville, it was leased to Lubliner & Trinz, becoming the largest film theater in the city despite its tiny, high-perched projection booth.

In 1928, Balaban & Katz and Jones, Linick, & Shaefer took over the Covent from Lubliner & Trinz (B&K subsidiary) and closed it in order to help the struggling Diversey/Century theater nearby.

Reopened as Covent by B & K on December 22nd, 1932 as a discount theatre. Small grand opening ad in the photo section. Listings stopped in 1958.

Circa 1971 Saul Smaizys photo via Flickr. Covent entrance would have been where the Playdium Bowl Parking is on the right. Image will enlarge in link.