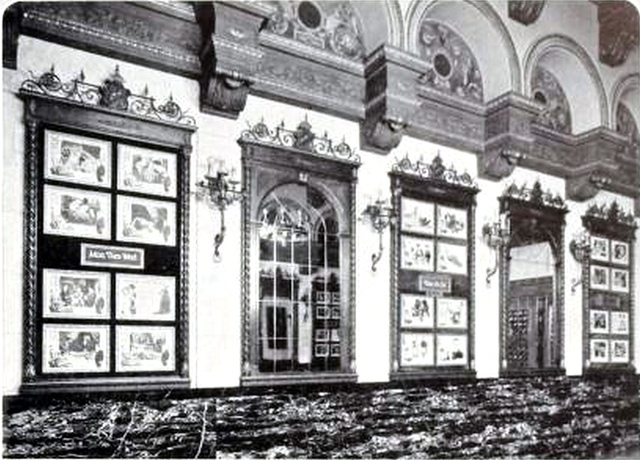 The Sanford Theatre was opened September 13, 1926 by Fabian Theatres. By 1941 it was operated by Warner Bros. Circuit Management Corp.

I went to the Sanford theater in the 1960s. The only film I remember seeing was “The Time Machine” with Rod Taylor. I also remember there
was a vacant lot next door and my father told me he remembered a small bar or restaurant on the small vacant lot.
I don’t remember much about the interior but it was lot nicer than the Chancellor—that place was a dump.

More on the Sanford. I spoke with my brother the other night and
told him about this site. After talking with him, I recalled a few more pix at the Sanford—Birdman of Alcatraz, The Incredible Mr. Limpet, and The Long Ships. Obviously, I came from a rather eclectic
movie-going family!! Everybody in my family loved movies. My father is 90 and he remembers silent films in Newark—although admittedly,
he went more to hear the various pit bands and accompanists rather
than seeing the films. He does remember seeing Lon Chaney, Harold Lloyd, and Douglas Fairbanks. Although he warmly recalled Chaplin
and such lesser comedians such as Larry Semon and Lloyd Hamilton,
Buster Keaton hardly rated an adjective!!!

I grew up in Irvington; graduated IHS in 1977. I have many fond memories of the Sanford Theater and went there several times. I remember seeing Born Free there, The Love Bug and Lady Sings the Blues. Unfortunately, memory fails me as to the rest of the movies I saw there. I remember seeing cartoons before the movie as well and as “movie guy” stated above, I also remember the vacant lot next to the theater. I remember the lobby being on an incline as you walked to the ticket person; then through doors into the main lobby of the theater where the snack area was. I also remember the ushers constantly walking through the theater shining their flashlights down the rows of moviegoers, the architecture of the ceiling and the curtain that opened when the show was about to begin. I have not been to Irvington a quite a few years; however, the last time I drove down Springfield Avenue, a Home Liquors was now standing where the Sanford Theater used to be.

Listed as part of Stanley Warner Corp. in the 1956 Film Daily Yearbook.

I practically lived at this theater on weekends in mid 60â€™s and early 70â€™s. I saw every Elvis movie, A Hard Days Night, James Bond, and too many B&W Roger Corman type â€œBâ€ monster movies with their kiddie matinee program. It was only a mile and half from Ivy Hill to the corner of Sanford and Springfield Ave., but it was a road trip to us kids and it was fantastic.

Oops, the “B” movies were at the Stanley on So. Orange Ave.

I lived about 6 blocks from the Sanford near Kless Diner and used to go every Sat afternoon in 50’s and early 60’s. I saw Jerry Lewis there live for opening of films . One i beleive was Visitor to a Small Planet in 1960. I started doing concerts at Symphony Hall in Newark and have toured in evry city in theatres and venues for over forty years. The Sanford was my first theatre and started and interest in old theatres I still possess. I have helped refurbish theatres in Asbury Park, Red Bank , Ocean Grove sometime with lighting or finding old seats that matched. The Sanford was a great local movie theatre.

Wurlitzer installed their organ opus 1301 here in 1926. A style 235 III/11 is a nice size organ for a 1700 seat theatre. The Sanford must have started out as a first rate operation.

The Sanford Theatre opened on September 13, 1926, according to the October 23 issue of Motion Picture News. The theater was in the Spanish Renaissance style, and was originally operated by Fabian Theatres in association with the Stanley Company.