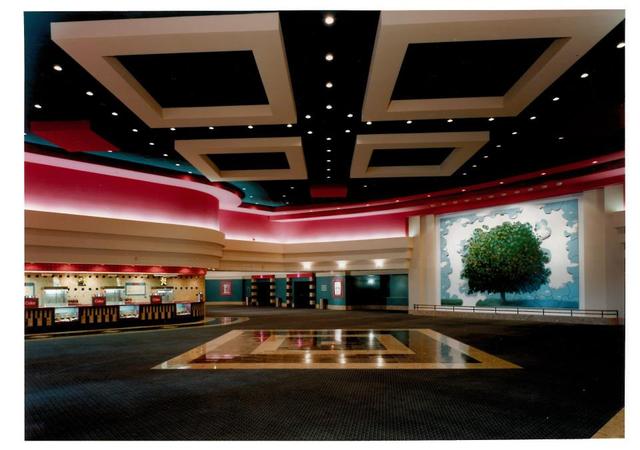 The Sherway Cinemas was one of the first multiplexes built in Toronto, Ontario, Canada,and was located in the Etobicoke district. Known for its three story high lobby and multiple concession stands, this theater was one of the most popular of its time, and was operated by Cineplex-Odeon.

One of the most popular features of the theater was the 1,500 space parking lot that made parking easy.

The theater has converted into a department store.

Yeah the photo defintely takes me back to the heyday of the chain after the expansion. Still miss catching screenings here ;–(

I agree…miss this place a lot. I preferred the large, open lobby here than at the Queensway cinemas that replaced this. Also the convenience to Sherway Gardens across the street was great. This would have made a terrific discount house and who knows, it might still be there. Too bad Rainbow didn’t get a crack at this since all their other local cinemas are former Cineplex Odeons.

I remember I was so shocked when Sherway Gardens mall across the street from here opened in 1971 and didn’t have a theatre in it. By that time there were several malls in the Toronto area that had at least one screen, or twins but Sherway never did. That’s why it was so exciting when this was opened in 1987 with 9 screens! Which was a lot in those days.

Big time! I still remembered the expansion back in 1997 bringing the total up to 15 screens or so and them being pretty high end at the time and being equipped with the highest THX surround at the time. Only reason it was closed was strictly the lack of `Stadium Seating, and that was it. Could have defintely found a way to continue making it feasable for sure.

This opened on December 11th, 1987 along with the Oakview Mews and the reopening of the Pantages. I uploaded the grand opening ad.

That became a Sears before it becomes a Nordstrom. Sears recently announced they are leaving Canada in a few years so it is likely or not it will become a cinema again.

The cinemas were in a different building across the street from the mall. The former cinemas became and still are a Home Outfitters, a Sears Home store and a Homesense. The Sears department store was in Sherway Gardens mall, across The Queensway from where the theatres were. The former Sears department store is becoming a Saks Fifth Avenue and Nordstrom is going where the present Sporting Life store is. Even if the three stores vacated where the former theatre was, I doubt it would ever become a theatre again, unless Landmark wanted to build there. Cineplex obviously wouldn’t since they left as soon as they opened the Queensway cinemas down the street.

So if Sears is leaving Canada that leaves a big hole in Toronto’s marketplace. First Marks and Spencer went, then Eaton’s, now Sears. Who’s going to take over their outlets beside Hudson Bay?

Sears isn’t necessarily leaving Canada. It dropped a few locations at certain malls. At Square One it’s being replaced by Simons of Quebec. At Sherway Gardens, Saks Fifth Avenue. At Eaton Centre, Nordstrom. The one in downtown Vancouver is also to be a Nordstrom. Not sure what the Yorkdale one is becoming because Nordstrom there is in a new addition presently under construction.