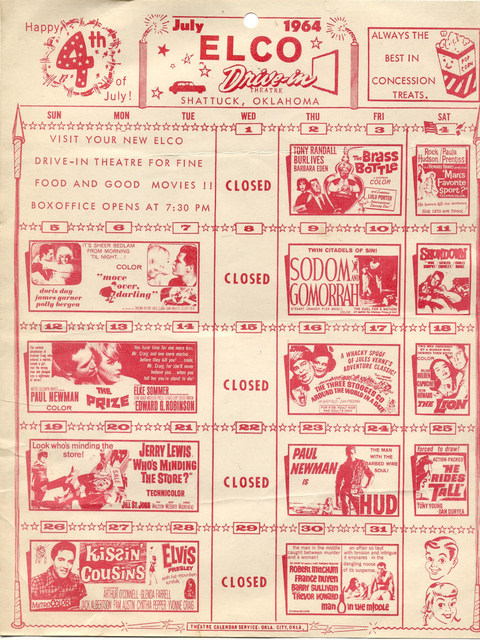 The El-Co Drive-In was operating by 1955. The El-Co Drive-In was tiny with only a 140 car capacity It was originally constructed of wood, and susequently burnt down around 1963. A new theatre was built of concrete blocks, which operated until at least 1975. It was toppled in a wind storm.

In November-2011, a new drive-in theatre was constructed and opened in Shattuck, and the owners managed to secure the name rights of ‘El-Co’. The name El-Co is derived from the name of the county town of Shattuck which is located in Ellis County, hence ‘El-Co’.

The Drive-In was located south of the town approximately 1600 Main Street on the SE corner. There are no remains of the drive-in and a building sits on the location. https://goo.gl/maps/N4wyI

The viewing area was still visible in HistoricAerial.com’s 1995 photo at the southeast corner of what is now E0520 Road and Main Street. (Thanks, Kenmore!) Buildings had replaced it by the 2003 photo.

Boxoffice reports that C A Crouch owned the El-Co Jul 5 1976.