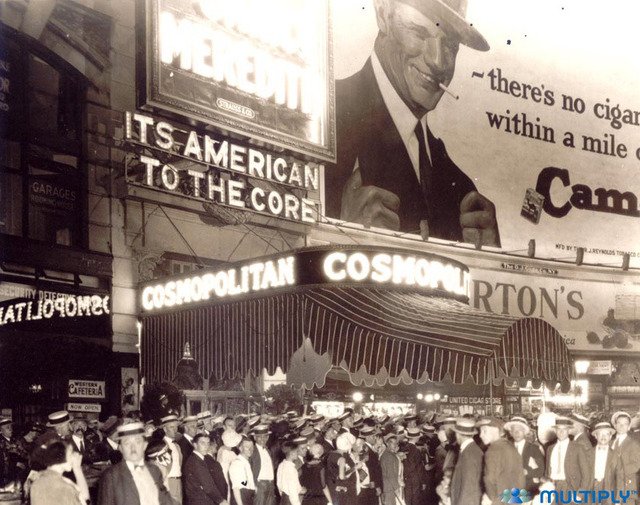 Around the turn of the century, many believed that the new center of New York’s entertainment district would be moving to Columbus Circle, and E.D. Stair and A.L. Wilbur backed up the speculation by erecting a grandiose new theater at the western end of the oval-shaped plaza, Grand Circle, in 1903.

Designed by John H. Duncan, the 1,584-seat Majestic Theatre had entrances on both W. 58th Street and W. 59th Street, as well as its main entrance on Columbus Circle. Featuring a large proscenium arch, two balconies, a double staircase in the lobby and two sets of box seats, the Majestic Theatre truly lived up to its name, and was designed to be every bit as impressive and ornate as the finest European opera house.

The lobby and hallway walls were covered in marble wainscoting, while gilded columns lined the upper level of the lobby and also pairs of massive white columns framed the side boxes in the auditorium, capped by statues of trumpeting cherubs and colossal golden eagles.

The stage, at 80 feet wide and 38 feet deep could accommodate the most elaborate of shows, and did just that when it opened in the fall of 1903 with the first musical stage version of “The Wizard of Oz”, which was a tremendous hit. Its then-jaw dropping special effects, such as an on-stage tornado were particularly crowd-pleasing. It would run for over 10 months.

In 1911, the Majestic Theatre was renamed the Park Theatre, which continued to feature legitimate theatre, but also Sunday afternoon movie screenings. As the Park Theatre, this is where “Pygmallian” had its debut.

However, in 1922, burlesque came to the Park Theatre, and it was again renamed, as Minksy’s Park Music Hall. A year later, William Randolph Hearst acquired the theater, and made it the main venue for his own Cosmopolitan Pictures film company. It was given yet another new name, the Cosmopolitan Theatre.

Florenz Ziegfeld took over the Cosmopolitan Theatre in 1925, and his house architect, Joseph Urban, updated the interior. For 9 months, it returned to legitimate theatre, but in 1926, Ziegfeld gave it up to focus on the construction of his self-named theatre. Under new management, however, the Cosmopolitan Theatre continued to stage legitimate fare until the Depression forced its closing in 1929.

It reopened in 1931, now presenting a mixed bill of vaudeville acts and motion pictures. From 1934-35, it was once more legit, as the Theatre of Young America, but late in 1935, movies and the old name, the Park Theatre, returned again.

In 1944, now renamed the International Theatre, the theatre hosted the Ballet International for several weeks, then a brief run of legitimate theatre, the next year. In December 1945, it was a movie house once more, as the Columbus Square Theatre, but was the International Theatre again by the following August, hosting the occasional live performance but mainly sitting vacant until acquired by the NBC network in early-1949, as a television studio premiering the Admiral Broadway Review on January 28, 1949. The stars were Sid Caesar and Imogene Coca. The television program was “Your Show of Shows.”

NBC left the International Theatre in 1954, and not long afterwards, the former theatre, along with most of its neighbors on Columbus Circle, was razed to make way for the New York Convention Center.

There was a Columbus Theatre at 981 West 8th Avenue and still showing films in 1938. Does anyone know if it was this same location?

As the UFA Cosmopolitan, this location was German films until at least 1931.

Too bad none of the photo links work anymore.

Many of Warren’s photo links are no longer working anymore.

Warren’s links posted on May 16, 2008 are still working and are worth checking out. (Where is he, anyway? I miss him.)

I recently saw It Should Happen to You on TCM, starring Judy Holliday and Jack Lemmon, and I noticed the “International” theater’s marquee said it was an NBC television studio.

I believe the big billboard that she puts her name on is the one directly to the right of the theater, which billboard is noticable in all the exterior shots posted here.

In 1909 this theater, then being operated as the Majestic by the Shubert organization, was converted for a while into a combination movie and vaudeville house. The article about the Majestic in the June 12, 1909, issue of The Moving Picture World is worth quoting in its entirety for the glimpse it offers of the early days of movie exhibition in large theaters:

“The conversion of the Majestic Theater into a moving picture house is an event of first rate importance, for the Majestic, which is situated on Columbus Circle, is pretty well in the heart of New York City and it is a high-class theater, ranking with the best. Presumably the Shuberts, not wishing the house to remain dark in the Summer, are trying an experiment at the Majestic in giving exhibitions of moving pictures sandwiched between chunks of vaudeville. The result of the experiment will, of course, be watched with interest. If it succeeds, then we may expect other Broadway and uptown theaters to follow suit.

“The Majestic is a very large theater and it takes a great number of people to fill it. It is also a beautiful theater. Its situation is unrivaled for tapping a vast section of New York’s population. A little while ago, when writing about a neighboring moving picture house, I suggested that the district of Columbus Circle is one in which a first-class moving picture theater could be profitably placed. I wonder if the Shuberts have adopted my suggestion? If they have and they read this column, they will probably be glad of a few hints as to how to run their theater on a profit-paying basis.

“When I visited the house the other day there was a fair-sized audience. The programme consisted of vaudeville, songs, moving and talking pictures. The vaudeville was just tolerated. It is true that I was present in the afternoon, when things are generally flat and dull, but the audience was sufficiently large to enable me to form an opinion as to how they regarded this innovation at the Majestic. Their interest is chiefly centered in the pictures. These, however, I was sorry to observe, were a month or two old. Nevertheless, the Biograph and Pathe subjects attracted great attention, and, more remarkable still, a phenomenon in the moving picture theater, occasionally elicited considerable applause.

“It is a moot point whether the Majestic is not too large a house for moving pictures—the people at the back of it are a long way from them. Still, the enterprise of the Shuberts should not find any difficulty in filling the place. What is wanted, of course, is less vaudeville, or none at all, and more pictures. Not old subjects, but the very latest releases. Then the manager might try the effect of a little orchestral music, instead of the simple unaccompanied piano.

“Experience shows that the Keith & Proctor houses are successful with moving pictures alone, and there is no reason why the Majestic should not be as successful. Between Columbus Circle and 125th street, on the West Side, there are a large number of people who would, no doubt, be constant visitors to the house if a suitable program of pictures were provided. Then, of course, there is always a floating population of New York City in search of cheap entertainment.

“Evidently, then, the theater magnates of New York City are seriously considering the moving picture as a moneymaking proposition. Let them go about the business on the lines I have indicated and they will be successful. Half-and-half measures are worse than useless. A half-million of people in New York City daily want good pictures. This is probably a larger number than all the visitors to the vaudeville and theater houses combined and it is worth while catering for, in a liberal, intelligent and generous way.”

In 1934, The Theater of Young America presented “The Chinese Nightingale” with music by my father, Alan Shulman,at the Cosmopolitan Theatre. The show opened on October 5, 1934 and ran for 8 performances. Flora LeBreton starred and the orchestra was conducted by Dr. Francis Gromon. In 1947, as the Majestic Theatre, is was used by International Records to record the Stuyvesant String Quartet and the New Friends of Rhythm. www.alanshulman.com

Ruth Crosby Dimmick’s 1913 book Our Theatres To-day and Yesterday says that Marcus Lowe took over the Majestic Theatre in December, 1909, and operated it as a movie house until it was taken over by Frank McKee and renamed the Park Theatre in 1911.

What a great blog! I am desperately in need of the dimensions of the actual “proscenium opening” of this theatre for a design project I am working on. Thanks for posting the stage size. If you have the Proscenium measurements or any other specs for the old Majestic I would be most grateful.

Wizard_Boy: The book does not have a reputation for being perfectly accurate, but for what it may be worth, the listing for the Majestic Theatre in the 1909-1910 edition of Julius Cahn’s Official Theatrical Guide gives the dimensions of the proscenium as 37 feet wide and 48 feet high.

A scan of the book, with the Majestic listed on page 81, can be seen at Google Books. The stage dimensions given in the book do not match those Bryan Krefft gives in our introductory description above, and Bryan may have a more accurate source, so you might want to wait and see if he responds, though I’m not sure he’s still watching the site.

Sadly, the only interior photos of the Majestic I’ve found (three of them, at IBDB) don’t include a full view of the proscenium.