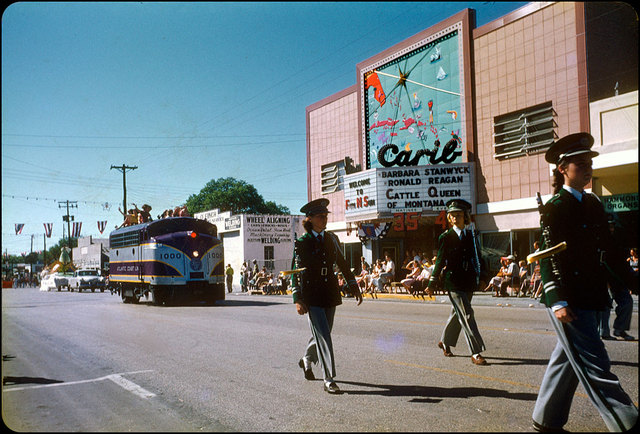 The Carib Theatre was opened January 7, 1954 with Jane Powell in “Three Sailors and a Girl”. It was operated by Floyd Theaters. I’m currently researching this theatre. I have some nice Kodachrome’s I will be posting. The marquee was similar to the Carib Theatre in Miami.

The Carib Theatre was closed on April 3, 1983 with Barbra Streisand in “Funny Girl” & “Funny Lady”. It was demolished on April 22, 1984 to make way for construction of a bank.

Floyd Theatres HAD the Whole state it seemed to me!Much like MARTIN Theatres in Georgia.

Thunderbird Drive-In… Wasn’t that by the Wagon Wheel Flea Market? Also I recall the Mustang Drive-In on Belcher in Clearwater.

On Belecher road and Cleveland St (which ended at Belecher) was the Gulf to Bay drive in.

Floyd did have a lot of theatres at the end of the “good ole days”.
My grandparents and their brothers & sisters had a small chain of indoor and outdoor theatres throughout the state of Florida back in the day. The last one they had was the outdoor theatre off the highway in Bartow. It is a flea market now. But the building is there; restrooms on either side of the building, the concession stand in the center and upstairs was the “house”. I remember laying in my grandmother’s bed while she work the concession downstairs, watching the cartoons then the movie through the wide window that was directly center of the screen.

Driving from Tampa on our way to Clearwater Beach during the 50s & 60s we would pass this theatre but unfortunately I never had a chance to stop and see a movie or at least see the interior. When the building was demolished there was a feature story published in the Tampa Tribune including interviews with several loyal patrons and how sad there were to see the theatre come down. Before demolition began a few people had arrived early to take whatever souveniers they could grab and carry out of the theatre. The Carib was replaced by a Barnett Bank building.

The Carib theater did not become the Barnett Bank; Barnett bought the building to use the space for a parking lot. I worked at the bank until 1979 and then left for college and came back to photograph the theater in 1983 just before it came down. I have interior shots of the lovely Egyptian figures displaying the history of sound and motion picture that were painted two stories high on the inside of the theater. To my knowledge these are the only photos of the inside that exist. I will post them at a later time as I am using them in research that is to be published soon.

The manager of the Carib was named Clarence, and while the national anthem movie was played before every feature, he would stop the film and turn on the houselights if patrons did not stand.

Yes, the Thunderbird was on East Bay. Another great theater gone.

Opened with “Three Sailors And A Girl” (I haven’t checked if short subjects were added yet, but I will find it soon).