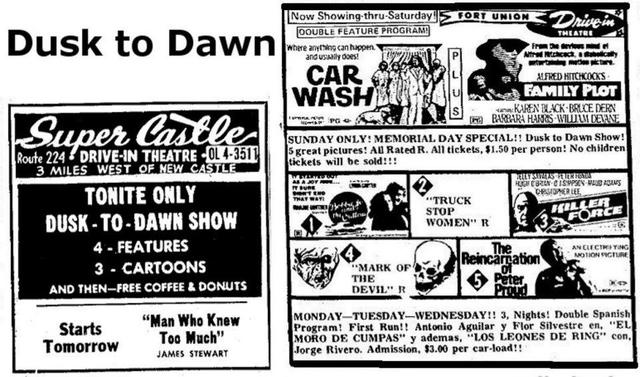 The Super Castle Drive-In was opened on April 16, 1948 with Joe E. Brown in “Riding on Air” & William Boyd in “Hopalong Casidy Returns”. It was a single screen drive-in just outside of New Castle PA in Union. It was interesting, because the screen was done up like a castle, and had big turrets on each end. It was still open in the 1960’s

Here is a June 1955 ad from the New Castle News:
http://tinyurl.com/yl5avpy

The ad just posted pretty much confirms the location I pointed out on 8/24/09. 3 Miles West of New Castle on Hwy 224. There is a Wal-Mart SuperCenter a few blocks away, but not at the old drive-in property.

I would say the Franklin address is incorrect.

Guess I need to retract parts of my comments. Looking at 1993 imagery on Google Earth, there was a larger drive-in on the SW corner of 224 and 60, East of Winter Rd. Less than ½ mile apart from the other drive-in. Yes, a Wal-Mart occupies the site.

The Super Castle was certainly the nicer of the two area drive-ins. It had a larger field, a large concession stand and very large block and concrete screen tower. Screens â€œwingsâ€ were added for cinemascope in the mid-50â€™s. By the 60â€™s the Super Castle was running first-run product with the Penn Theatre, downtown. Often the filmcoâ€™s would allocate a single print for the town. Ushers would take one reel (20 minutes) from the Penn projection booth and swap it for a reel at the drive-in. The two theatres were more than 5 miles apart. Timing was very important and too many red lights or a train would result in a dark screen until the usher could make it back to one theatre or another. This â€œbicycling printsâ€ program continued until a train hit an usherâ€™s car, hurting him and destroying his car. After that there were always enough prints available and nobody had to share.

the wal mart sits where the castle was…..the drivein about ½ west from there was the Parkstown, it was located next to a roller rink and across from Rileys fun spot. ( all are gone now)

Plus one for the Skyline down the road

During its last few years of operation, the theater screened X-rated films, and had a variety of vehicle accidents and robberies. It was closed in 1972.