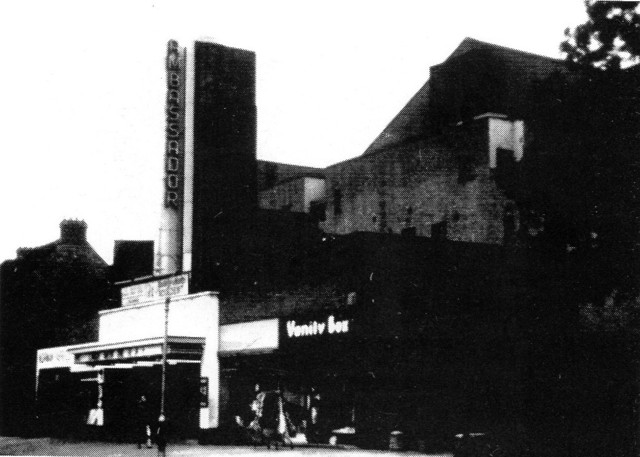 Located in Hayes, Middlesex, today part of west Greater London, on East Avenue close to the junction with Botwell Lane. The Ambassador Theatre was built for a local company Hayes Ambassador Ltd. which was actually part of the London and Southern Cinemas Ltd. chain. It opened on 19th December 1938 with “This Man is News” starring Valerie Hobson, who made a personal appearance. By the time it opened, London and Southern Cinemas had been taken over by the Oscar Deutsch chain of Odeon Theatres Ltd.

Designed by architect F.C. Mitchell, the Ambassador Theatre had a tall fin tower on the centre of its facade. Inside the semi-stadium styled auditorium, seating was provided for 989 in the stalls and 528 in the raised section at the rear. There was a highly ornate ceiling, decorative grilles beside the proscenium, designed for an organ chamber, but no organ was ever installed.

Like all other theatres in the Odeon chain, it was later taken over by the Rank Organisation. It was never re-named Odeon, and the Ambassador Theatre closed on 10th June 1961 with Jimmy Edwards in "Nearly a Nasty Accident" and Walter Macken in "Home Is the Hero". The cinema stood empty and unused until 1969, when it was demolished and a GPO telephone exchange was built on the site, today it is a British Telecommunications Centre.

A set of vintage photographs of the Ambassador Theatre, photographed at its 1938 opening:
View link