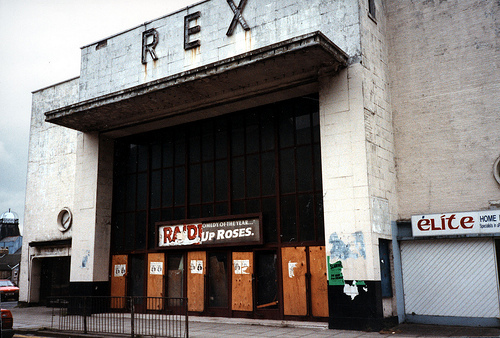 The last single screen cinema to be built in Aberdare. The Rex Cinema opened on 10th April 1939 with Janet Gaynor in “Three Loves Has Nancy” and Pat O'Brien in “The Garden of the Moon”. The Rex Cinema had a fairly plain façade, that had a huge central glazed opening, which was topped by a very high canopy, with the name REX above. Inside the foyer and auditorium there was decorative plasterwork in an Art Deco style. The proscenium was 56 feet wide. It was equipped with a Compton 2Manual Theatrone organ which had an illuminated console on a lift.

In the early-1970’s the Rex Cinema went over to bingo sessions on two days a week. It was closed on 6th July 1983, and within weeks of closing the Compton organ was sold.

In 1985, the building was used as the setting for the Welsh language feature film “Coming Up Roses”, one of the very few films ever made to star a cinema, in which a group of local people use an old cinema as a mushroom farm! The Rex Cinema was partly repainted by the production crew especially for this production, and there was hope that it may be re-opened. Sadly, this never happened and it was demolished in 1990, and the site became a car parking space.

This was one of the few valley cinemas to install and retain BTH integral projectors throughout its working existence. These BTH machines were amongst the most difficult of machines to use as far as projectionists were concerned.

This is not the first time I’ve read about projectionists finding BTH projectors being difficult to operate. I worked on BTH for many years and found them so easy and simple to lace up and operate.

Maybe it depends which model one has worked on, our’s were BTH Type A, I’ve helped out a bit at cinemas with Cinemeccanica machines and found them difficult to thread the film around the sound head with all those rollers.

Some pictures are to be found on the RCT Council’s Library/Local History web site. They include the derelict BTH “Supa” projectors and an auditorium view .

Here’s some scenes of the cinema from the film Coming Up Roses
http://www.youtube.com/watch?v=fiaU3OrUf68

Not all BTH projectors were difficult to use. The ones that gave jobbing projectionists the most problems were the integrated versions of the BTH Supa. I experienced these machines at a number of theatres including the Regal Chepstow, the Rex at Aberdare and at a cinema in Bideford whose name slips my memory. The earlier BTH models were quite easy to operate as Eric Evans states.I grew to hate the integrated Supa machines so much so that I very rarely undertook a repeat jobbing session at any hall where I found them installed. Changing from scope to flat was a nightmare when one had a scope screen trailer sandwiched between Pearl, Dean and Younger adverts plus a follow on wide screen presentation. The integral change over devices were notorious for failing and in many cases were never repaired.The cinema at Bideford had them wired out and change overs were achieved with a home made set of sliding black steel plates and a cross over switch for sound. The other bit of kit that projectionists hated were the Ross Stream Light Arcs.Heavy on carbons, difficult to adjust and prone to gearing / feed problems.In the early 1960s many of the 3rd tier halls actually removed their Ross Arcs and replaced them with older Kalee Regals instead.The Regals having come from closed halls. The Castle at Caerfilli being an example. To the best of my knowledge the only South Wales circuit to stick to Ross Arcs to the bitter end was the small Bridgend Cinema circuit.The last of their cinemas to use them being the Embassy at Bridgend.

As a projectionist many years ago I worked on BT-H equipments and found no problem using them my favourites was the pre-SUPA, RPR(Rack and Panel Reproducer) easy to thread and very quiet running

I’ve uploaded a photo of the BTH type A projectors,at the Town Hall Cinema Pwllheli, changed to Westar in 1990. If you want to look up this cinema it’s now named Neuadd Dwyfor Pwllheli. Just click on photos for the picture.