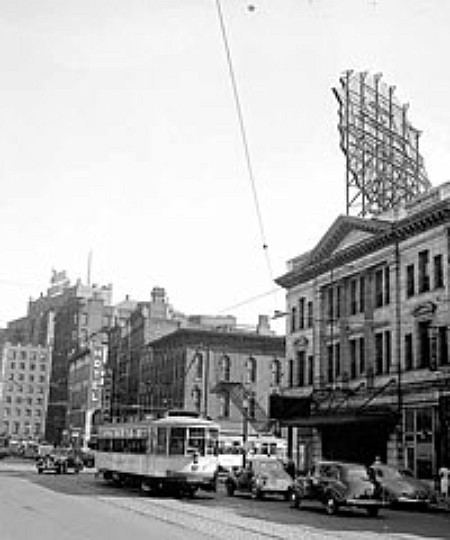 The Gayety Theatre was opened by Herman Faehr in 1909, originally as a legitimate house, and could seat just over 1,200. It was designed in Neo-Classical style, and its proscenium arch rose seventy feet above its stage. The facade, which featured a pediment held up by a quartet of Corinthian pillars, was of gleaming white terra-cotta.

By the mid-teens, the theater had switched to vaudeville and burlesque acts. During the 1920’s, among the famous names to play the Gayety Theatre included Al Jolson, Fanny Brice, and Sophie Tucker.

The city of Minneapolis closed down the theater in 1928, after it decided the burlesque acts at the Gayety Theatre were becoming too racy. It was only after its management promised to stage musical comedy acts onstage rather than burlesque that the theater was allowed to reopen the next year.

In 1941, after nearly four decades of live entertainment, the Gayety Theatre finally turned to movies, as a double-feature house. In late-1941, the theater’s name was changed to the Floyd B. Olson Theatre, named after a popular Minnesota governor of the 1920’s and 1930’s, who died in 1936. However, when Olson’s widow learned her husband’s name was now on the marquee of the former burlesque theater, she sued the theater, which immediately switched the name back to the Gayety Theatre, and Mrs. Olson dropped her suit.

In the mid-1940’s, the theater closed again, this time permanently. In 1945, plans were drawn up to convert the Gayety Theatre into a nightclub, but fell through. Then, in 1970, after sitting vacant for decades, it was announced that legitimate theater would be returning to a restored Gayety Theatre, but once again, nothing came to fruition. The theater was razed by 1980.

I am interested in any information on someone who may be interested in Gayety Theatre Show Programs……please direct any serious inquiries to .net

On its former location, the entrance parlor floor of Runyon’s restaurant is still marked “Gayety Annex”

I have an old ticket stub from the Parquet (Gayety) in Minneapolis, MN. It says Left L 2, Good Only Sunday Mat Apl. 12 (no year given) SS.
What I am wondering, what year is this ticket and what performance was going on at that time? Contact me at

My grandfather played as a musician in this theater in the late 1920’s.

The March 7, 1909, issue of The Improvement Bulletin said that W. H. McElfatrick had designed the new Gaiety Theatre that was to be erected in Minneapolis.