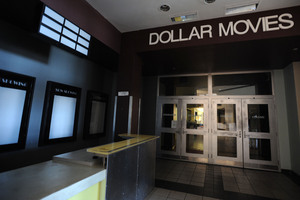 This theater, much like the mall in which it is located, has had its ups downs since it opened in 1973, and a number of operators. It once had seven screens; it last operated as a quad, run by Teichert Theaters as a bargain cinema.

This link has some pictures of the theater under some of its former names:
View link

This theater closed in June of 2010, apparently with little fanfare. The space it occupied will now be a sporting goods store: View link

Really? If that is correct it means this theater went from four screens to seven and then back to four.

As for successful engagements at this theater… While known as the UA Movies at Briarwood, they ran “Star Wars” for 33 weeks during 1977-78. For 13 of those weeks it was shown on two screens. “Star Wars” ran even longer at the similarly-named and designed UA Movies at Woodland in Grand Rapids (no page on Cinema Treasures, as far as I can tell).

The three screens that were added to the original four were carved out of adjacent retail space, as I recall. Teicher apparently decided not to operate them – perhaps not wanting to pay the additional rent. They eventually reverted to retail, either a candle store or a Pottery Barn. It has been many years since I was there.

According to the Detroit Free press article posted at WaterWinterWonderland, Madstone took it over as a 10-plex and reduced it to 7. Madstone did this at an AMC 10 plex in Chandler, AZ as well since sometimes 10-screens is just too much art film.

Perhaps this is where the confusion is coming from? The lack of anybody citing it was once a 10-plex as well?

Scott, I think you are misreading the article quoted on the Water Winter Wonderland page, which is probably due to the way the text was entered; there is a break in the middle of a sentence where there should not have been one. The line should have read: “The company closed two other theaters — in Atlanta and Chandler, Arizona – Tuesday, reducing the number of Madstone Theaters from 10 to seven.” It was the number of theaters operated by Madstone that was reduced to ten, not the number of screens at Briarwood.

Also, another quote there confirms my vague recollection that the space occupied by the three additional screening rooms became a Pottery Barn. So, strange as it may seem, this theater does appear to have gone from a quad, to a seven-plex, and then back to a quad.

Sorry, I should have said “…that was reduced to seven (not ten)” in the part in quotes above.

Chuck, Teicher closed the cinema because the mall had found a tennant willing to lease the building for more rent per square foot. Teicher went on to re-open a UA 10 in Palm Bay Florida. It is a 10 screen Dollar house in the middle of at least 4 newer 1st run venues.