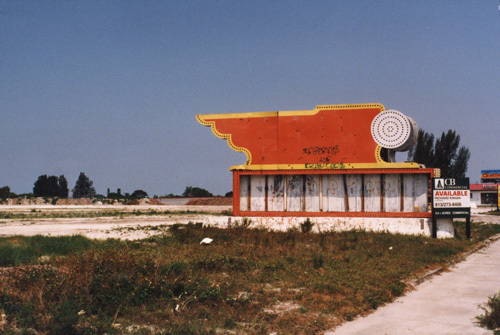 The Trail Drive-In opened on April 28, 1949 with Eddie Albert in The Dude Goes West". It was built by Hugh Thomas and Mose L. Waller of Waller & Thomas Amusements. Both men were from Lenoir, TN. They also built and operated the Siesta Drive-In in 1952. In March of 1953, Mose L. Waller & Hugh Thomas were indicted for failing to pay Federal Admission Taxes from the Trail Drive-In. They were sentenced to 6-months in federal prison and required to pay $5,000 in fines. Their jail time was suspended if the fine was paid within two years.

On February 1, 1955, the Trail Drive-In was sold to Jack Hunt and Raymond Carsky, who were from Chicago. Between the two men thay had 26 years in the movie theatre operation business. In July of 1956, Waller and Thomas Amusements were ordered to pay $17,000 to seven motion picture companies. This charge was for allegedly reporting ticket sales that were lower than they actually were at the Trail Drive-In when they operated it.

Hunt & Carsky sold the Trail Drive-In in March of 1962 to Iselin Theatres of Albany, NY for $310,000. Alan V. Iselin reported that there will be $100,000 worth of extensive updates to the drive-in. These new features included new cafeteria style concessions, enlarged restrooms, a special nursery room and updated widescreen projection and sound. In 1970 the General Cinema Corporation was listed as the operator of the Trail Drive-In and the Suburban Drive-In theatres

In 1975, Charles Ivester took over the operation. Ivestor would end up operating all the drive-in theatres in the Sarasota area in 1979. These included the Trail, Bradenton, Bee Ridge 1 & 2, and the Skyway in Palmetto, FL.

From the 1950s, a postcard view of the Trail Drive In in Sarasota.

Marquee in 2001. The site has since been redeveloped.

This was at Tamiami south of Braden Av.

cduvalphillips For the record the Trail Drive-in movie was devistated by fire in January of 1981, remains unclear as to the cause. 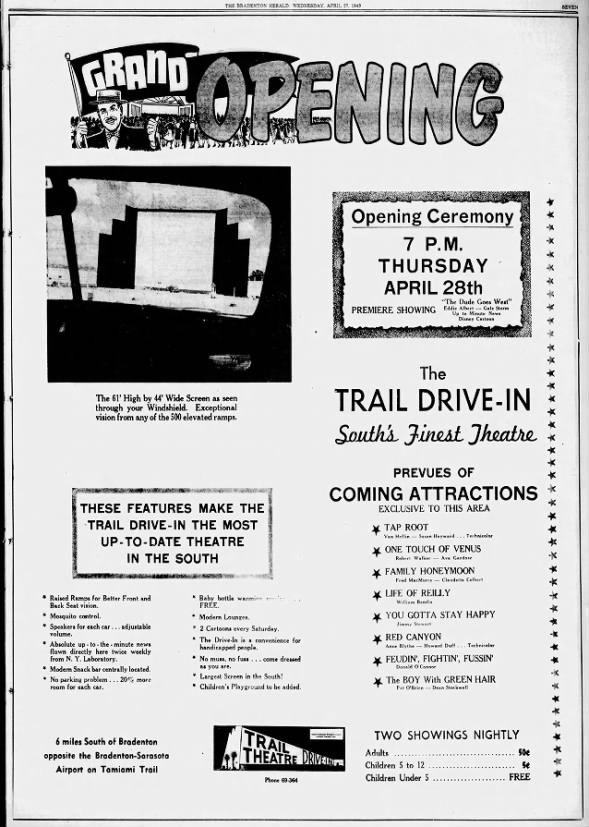