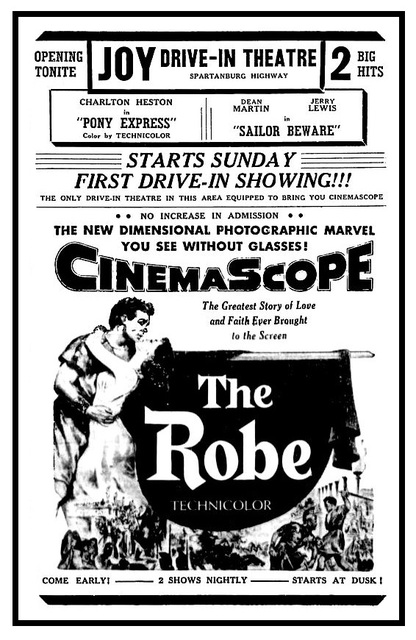 The Joy Drive-In in Hendersonvlle, N.C. served this mountain city prior to 1955 and well into the late-1970’s. At one time it was owned by S.Y. Neill before the Hendersonville Drive-In Corp bought it.

A large white marquee was located off Spartanburg Highway. It was operated by Ruth Northington for years while her husband ran the Carolina Theatre and the Hendersonville Outdoor Cinema.

My cousin, Ray Rogers, started his long theatre career at the Joy Drive-In. He first ran movies with the help of veteran projectionist Glenn Henderson. Glenn was a staple at that drive-in for years. It wasn’t long before Ray was called for snack bar duties. As Ray told me, "any job they needed a body for I was there."

I saw "Dirty Harry" there and even changed the marquee one night. Sadly the first feature was a horrible western "A Man Called Noon" but the second feature was the classic Paul Newman movie "Left Handed Gun". Sorta old for the 1970s but still a good western.

I remember watching this Richard Crenna movie "A Man Called Noon" with an R-rating, and for the life of me I couldn’t figure out how this got an R-rating. Heck, "True Grit" which was rated G was more violent! For the record, "A Man Called Noon" can’t be found in any VHS or DVD film library. But it did play at the Joy Drive-In.

The Joy Drive-In had a curved screen which Ray told me they sold this drive-in as the home of CinemaScope. I do remember it being a nice screen!

Unlike the drive-ins in my home town of Augusta, GA, the snow, ice, and cold winter nights in Western Carolina meant that the Joy Drive-in was open Thursday, Friday, Saturday, and Sunday nights for the winter months. The shows started at 6:45 during those winter months. They said, "be with us for the best in movie entertainment."

The one quick story Ray told me was, "when we got "Vanishing Point" in for a weekend run, Ruth had been told about the famous motorcycle scene with the nude blonde girl on the motorbike; she told me flat out that had to go because the drive-in was located right below a bridge facing the screen and she didn’t want cars crashing off the bridge!"

Ray went on to explain, "well, I find myself in the booth searching for this offensive moment in the movie and I snipped it out of the print, so even though "Vanishing Point" was rated PG when it played here Ruth had it cut out." Ray admitted that he did restore the edited section back to the print on shipping night.

I remember seeing a few R-rated movies at the Joy Drive-In and asked if Ruth made him or Glenn cut any more films. He couldn’t remember but that little PG movie "Vanishing Point" certainly was cut. Much like projectionist Chuck Dray would do at the Hilltop Drive-In in North Augusta, S.C. Dray would have to cut any nudity at that drive-in. Story on Hilltop is on CT.

The Joy Drive-In Theatre underwent a name change in the mid-1970’s. It was called Joy Outdoor Cinema on February 28, 1978.

Last time I drove by that spot the old train track was still there. I’m sure enginers got to catch a few seconds of the feature as they went down the track. Also, the paved road leading from the box office into the drive-in was still there. But nothing else.

HAS anyone EVER seen A MAN CALLED NOON? Could it be one of the worst western movies ever made?

April 7 1955 now playing at the JOY DRIVE in.. GREGORY PECK in YELLOW SKY and second hit is WAY OF A GAUCHO with Rory Calhoun.

Coming soon WILLIAM HOLDEN in STALAG 17 and the second hit will be FORBIBBEN with Tony Curtis.

DEC. 4 1954 NOW SHOWING on that CINEMASCOPE SCREEN “FORT DEFIANCE” and SPOOK BUSTERS. The next films to play there were “YANKEE PASHA” and “SPOOKS RUN WILD” Show starts at 6:45 nightly.

Feb.28 1978 the JOY OUTDOOR CINEMA is still open,but not called The JOY DRIVE-IN.

Ruth Northington,Manager of the Joy Drive-in Died early this year.She had been sick for several months and had 6 major operations in the last month or so.So many Moviegoers in Hendersonville knew her and her husband Jim.

When"Planet of the Apes" played in the late 60’s I was told one employee dressed as a gorilla and greeted folks as they came to the movies.I hope to get other stories on about the Joy Outdoor Cinema or Joy Drive-in,whatever you want to call it.

Note on above post movie at the JOY DRIVE-in “A MAN CALLED NOON” is out on DVD maybe i outta give it a second look.

My cousin was suppose to interview a booker in town that booked the Drive-in,Still nothing yet,sad thing is they often get together for dinner.