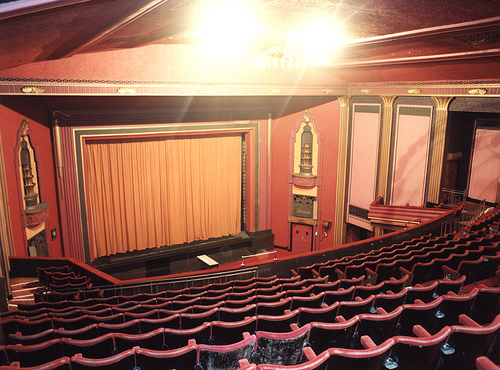 Originally opened as the Haymarket Cinema with Tom Walls in “Just Smith” on 21st December 1933. A project of Dixon Scott (who also commissioned the News Theatre on Pilgrim Street, now operating as the Tyneside Cinema), this was originally a comfortable city centre cinema of modest capacity (1,280 seats) which played second-run product. Its architectural style was Egyptian and was inspired by a Cairo cinema. The booking policy was to play the best of what had been relinquished by the city’s main cinemas at that time, namely the Paramount(later Odeon) Odeon, Queens, Pavilion, Westgate (later Gaumont) and Stoll Picture Theatre (now Tyne Theatre and Opera House).

The owners claimed that the building was quite capable of seating 1,700 people, but that they wanted the best in comfort and legroom for their patrons.

Associated British Cinemas(ABC) acquired the property from Dixon Scott in 1936 and extended its size considerably by lengthening the building. The alterations included the transfer of the projection suite from the circle wedge to above the rear circle. The enlarged capacity was 2,013 and the new booking policy was to play first run M-G-M, Warner Bros and, naturally, Associated British Pictures.

Although the ABC Haymarket was always a very busy cinema, it was to become disadvantaged by being compulsorily purchased by Newcastle University in the early 1950’s and leased back on relatively short leasehold periods to ABC subsequently. Newcastle University was never in a hurry to utilise the site to extend their premises but, by the same token, were not prepared to relinquish ownership of the building either.

Consequently, ABC were never prepared to inject large capital sums into the building by widening the relatively narrow proscenium during the wide screen era of the 1950’s and 1960’s or by subdivision during the conversion era of the 1970’s and 1980’s. For this reason (and to retain a foothold in Newcastle) ABC, by now part of EMI, acquired the twinned Essoldo Cinema on Westgate Road in 1974. ABC programmed this very nice (and up to date) twin in conjunction with the Haymarket until the latter’s closure on 20th September 1984, the final film was Prince in “Purple Rain”.

A rather sad end for what had once ranked as one of ABC’s busiest and most profitable cinemas in Great Britain. It was demolished in March 1985.

I have read various comments about this theatre over the years and they often allude to it being not particularly large whilst having no type of stereophonic sound. The latter observation is certainly true but this often applied to Circuit Houses particularly where they had Roadshow or other venues elsewhere in a city where 70mm and 6 track magnetic stereo were promoted features. So, in defence of the old Haymarket, I would say the following……….

The promoters of the original 1280 capacity cinema (ABC later extended the building and increased the capacity to 2000) claimed that it could easily have seated 1700 and this I am prepared to believe as the stepping in the Dress Circle (10 rows) was very generous and the legroom was better than that in the Royal Circle seating sections of both the Paramount/Odeon and Essoldo cinemas. The Rear Circle, which was added by ABC and consisted of a further 10 rows, was less generously spaced as was invariably the case in 1930’s cinemas.

The ABC Haymarket was made a compulsory purchase by neighbouring Newcastle University in the 1950’s and leased back to ABC always on short term leaseholds.

ABC were not prepared to lavish large capital investments in the rather old fashioned building with the ‘Sword of Damocles’ ever present.

When Douglas Parkin transferred to the Haymarket Newcastle as Manager from the Ritz Wigan in 1960 , Associated British Cinemas told him that he would not be there for long as there were plans to build a new luxury stadium style cinema in the city (rather like ABC Sheffield) to where he and the staff would transfer; this did not come to fruition.

The old Haymarket carried on for years on this basis although it always took a fortune at the box office and ranked as one of the biggest moneymakers in the UK and Film Distributors vied to play their latest releases there. In its heyday this was the house which played all MGM, Warner Bros and ABPC’s (Associated British Picture Corporation based at Elstree Studios and the Film Production arm of ABC) top films.

By 1974 Newcastle University were becoming even more intransigent with the terms of the cinema’s lease and ABC were operating on ‘six month permits’ – a situation which was most unsatisfactory. At this time Classic Cinemas, who operated the former Essoldo Westgate Road, found themselves in dire financial difficulties and offered the Westgate Road luxury twin cinema to ABC who purchased it.

As soon as Newcastle University learned about ABC’s now secure foothold in the city they ‘climbed down’ and offered ABC a five year lease on the Haymarket which ABC accepted and they then fully refurbished the old cinema and ran it in conjunction with Westgate Road ; the lease was subsequently renewed for a further five years during which period it was still well maintained.

In order of seating capacity Newcastle cinemas ranked as follows:–

The above capacities are those of each venue at its largest capacity wise; they were all modified over the years and most notably reductions occurred when CinemaScope was introduced and seats were removed from the front stalls owing to the greater screen width encroaching on the original sight lines.

So the Haymarket at 2000 plus seats was hardly small, was it?

The cinemas listed are those in the city centre as opposed to the suburbs such as Byker , Gosforth and Jesmond – however the Haymarket was still larger than any venues in those locations.

The source of the seating capacities is ‘Cinemas Of Newcastle’ by Frank Manders published by Newcastle City Libraries. It is worth noting that in cases like the Stoll and Pavilion , even more drastic seating losses occurred following closures of upper circles (the ‘Gods’)….

Here is what the planned replacement of the Haymarket Theatre would have looked like in the early 1960’s:–

3 photos of the auditorium have been uploaded. Sadly, these were taken in the cleaners lights the day following closure and the theatre looks far from at its best as a consequence……

Something never mentioned about the Haymarket: there was a very large restaurant on the first floor, the windows of which can be seen on all photos of the Front of House. Access was via large glass doors from the Dress Circle foyer.

It was the best cinema restaurant in Newcastle in terms of size and position with a panoramic vista of the busy Haymarket and the top of Northumberland Street.

It was used for V.I.P./Press Receptions until Newcastle University acquired it (as part of their Archaeology Dept) after when receptions were held in the offices/rear circle foyer area. If it was a particularly large function a nearby hotel suite would be hired.

I had a photograph of Tony Hancock with G.M, C D E Parkin in the restaurant for the launch of either ‘The Rebel’ or ‘The Punch and Judy Man’ and – guess what – I have mislaid it (like many others)….

If and when I locate it I shall upload it to the usual section.

I have not found the actual photo (it was in a desk drawer at the Haymarket long after the death of Doug Parkin) but I have found a link to – presumably – the same image :–

Four photos uploaded of the auditorium in the houselights taken a few days before closure.

Unfortunately, the cable for the tabs had just ‘given up the ghost’. Steve Veasey, ABC Furnishing Manager, had ordered new curtains and a pelmet for the Haymarket in 1980 but the latter failed to materialise for some unknown reason.

The fountains were only partially illuminated latterly and many of the elaborate light fittings had been removed during a 1976 re-dec. Furthermore, most of the trough lighting had also been disconnected.

By and large, though, the photos give a hint of what the place had looked like in its heyday.

Is there anything there now on that site?

Photo uploaded of the Press/Trade Show of ‘The Rebel’ at the ABC Haymarket in 1961.

Colour interior image dating back to 1955 (when all original lighting was in use) uploaded to photos section. This is courtesy of Kevin Gooding and would be a much better shot to appear with the overview than the existing one which was taken in the cleaners lights following closure.