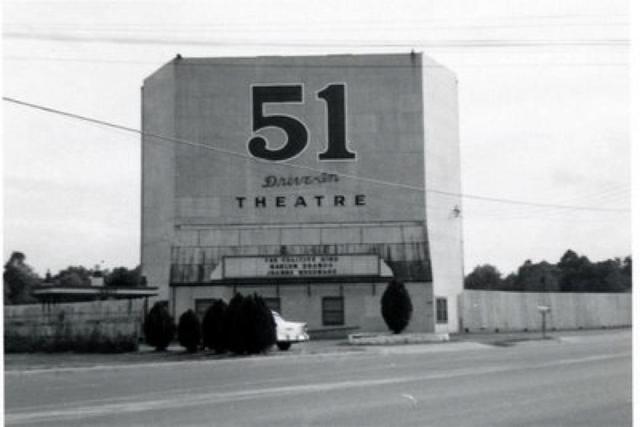 Max A. Connett Theatres operated this drive-in theatre in Jackson, MS, located at N. State Street and Meadowbrook Road. It opened September 23, 1949 and closed in the mid-1960’s

It is interesting that Gulf States Theatres opperated this drive-in and then developed the shopping center that was built on after the theatre closed. There was a large discount store that went out of business and Gulf States Theatres build a six screen theatre(Meadowbrook Cinema 6) where the former store was. For several years, Cinema 6 was the best theatre in Jackson.

The 51-Drive-In closed in the middle 60’s and a shopping center that included Miller Discount Store, Sunflower Foods and Pier One was constructed and opened in 1967. In 1976 the Miller Discount Store closed and Gulf States Theatres, which owned the property retrofited the store into a six screen theater. They did not raise the roof, but dug down created the sloped floors. I saw many films at the drive-in in the backseat of the car. Not what you think for I was a child and sat in the back while my parents sat in the front. Journey to the Center of the Earth and Mr. Hobbs takes a Vacation are two that I remember. Years later I worked at the six-plex.

The address for this drive-in was 225 Meadowbrook Road. Please update.

September 23rd, 1949 grand opening ad in photo section. Not much.