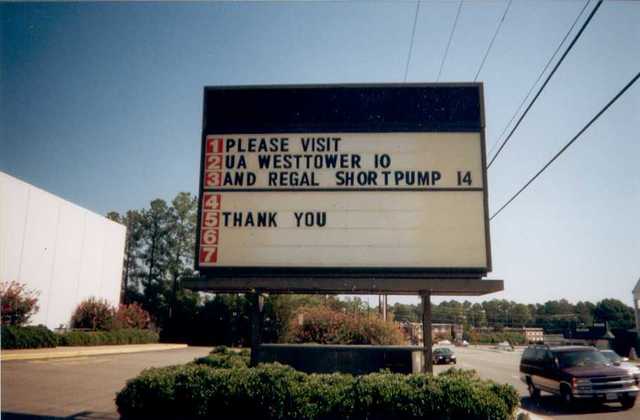 The two-story building had a huge, open lobby. On the second floor were three auditoriums, several offices which were used by the Regal District Management, and a concession stand. The first floor had two giant auditoriums with full stages, one with 750 seats and the other with 550. These two large auditoriums were originally the only two in the theater and were used for various types of live entertainment.

When it closed in September 2002, the now seven-screen theater showed foreign and independent films as well as first-run commerical fare. Regal decided to sell the old Ridge Theater and the surrounding land and it was demolished in early-2004.

Well I see it now So, Ray I just wanted to say Thank you for all the 1-Sheets AND Memories I still cherish to this day. Back in 1980 I was refered to you by a lil' old couple that Managed the Midlothian Cinemas on the Southside I started bugging them for Posters and such when Flash Gordon (Sam Jones) was playing. I guess I was such a pain they said “Call This Guy he was like you now he runs Neighborhood Theaters.” So VERY Long story short Ray you allowed me full access to the NTI Files where I was able to fill Shopping Bags full of 1sheets and Lobby Cards and Presskits from every Film I had on my list.You helped me track down my all time Favorite Poster Image from “Futureworld” (1976) a 1sheet I first saw at the Ridge.Soon I met Mr. Norwood at the Towne,State and Colonial Theaters Downtown Because these Movie Palaces had since Become “Blacksploitation” Gridhouses I was able to haul off Hundreds of Lobbys and Inserts Posters etc. from such Cult Classics as Coffy,Enter The Dragon,Shaft and Escape From New York (my Second fave film of all time) I was even invited to watch a Screening (With Ray and the NTI Suits lol) of a Musical(?) “The Idolmaker” IIRC It wasn’t that great. lol Another time The Movie Machine was trying to decide on a film to show for the “Midnite Movies” at the Ridge, I suggested “Enter The Dragon” And that Weekend there it was! I felt so important lol Well now I’m married 17 years and livein Naples Fl. We have 3 kids and funny enough my Son Taylor (named for the Character Charlton Heston portrayed in Planet Of The Apes!) Well,at the Ride old age of 12 is already showing as much passion about the Movie Memrobila as his old Dad. I just wish HE had a Ray or Jerry to befriend him now or a Ridge Cinema to Sneak into lol (Hey We’d pay for the First one then go Screen to Screen) Seems like The TWENTY plex here in Naples Fl is just so sterile and Impersonal or that’s just how time has warped my memories lol Well Anyhoo, Thank You Ray And Drop me a line if you have time.
John Branch /* w\\\\\\\\\\\"\\\\.wrwnb"+ "harcob@omdig.aol

Enjoyed the story.I guess one of the resons i decided to get a job and stay 7 years in the business was the one-sheets and color 8 by 10 stills we got. As a doorman it wasn’t long before the “paper” was going home with me,up til then i was told most of it went in the Dumpster,So I saved just about everything except Disney,and I have a few of those.Was able to get a good collection of 007 and Clint Eastwood.Worth Thousands of Dollars I know,but I never got them to sell.The one sheets today really are nothing like what you and i have.For one thing the things are smaller won’t even fit in my poster frames I have taken from old closed up theatres and Drive-ins!

I found a member named Fredrick,he has a page on Old Movie ads you might want to see underVintage movie ads I think.It is on my page on CT. Great ads he has on from the 70’s!

Thanks Mike and Yeah I REALLY did wanna get ahold of the Movie Machine (Ray) but meanwhile I come to this site and then even though I haven’t been in Richmond in Years I use Google Maps and I see what the Places like the Ridge or E. Broad St. Theaters look like now (IF they even exsist! Listen My Spelling sucks But, I find it funny that the Films directors like Tarintino (Sorry bout Spelling) Pay Homage to with movies like Grindhouse or Jackie Brown I have Actual ORIGINALS Stills & Posters of! Here’s another QUICK Thing, Back at the time I was talking about bothering Ray and Every other Theater That Would Talk To me, I began Calling and getting in much Trouble for HUGE Telephone Bills! to Most of the Major Studios At first I’d say I was with a student paper and needed a Press Kit but after a while I just started telling them the Truth and it worked!For The Senior Prom at my H.S. (Midlothian) I was asked by my Art Teacher if I could loan them my collection for the Prom decorations. I really didn’t want anyone getting rowdy and any of my stuff getting trashed but by then I had such a good reporie w/ a lady at Warner Bros. and Columbia’s Promo Depts, So I called w/ my teacher and the Lady in Burbank sent us A Tube and Four Boxes FULL of Stills Lobby Cards and Folded and Rolled One Sheet Posters Some lobby cards seemed to be left over from UK or Europe releases Such as Lobby cards for Mad Max 2 here (in the U.S.) It was called “The Road Warrior” and Lobby cards (I hear are valuble) A cult film. Then I found A Mint Rolled up 1- Sheet for Bladerunner This one was with the Drew Struzman art of Harrison Ford & Sean Young (DAMN I never really even liked this movie so I gave it to my friend John L.) BUT I now Could probly BUY SEAN YOUNG with what that one’s worth! lol FInally (I Promise) I gotta tell ya' this one: Okay So now I’m making weekly trips from school down to Ray’s office to pay for my Posters I ordered from National Screen Service Well,While reading a Review of Superman II in the Richmond Times Dispatch Newspaper,I thought I see if I could get them to part w/ any Presskits and such from the Reviewers. So I went down to their offices and in the more relaxed days Pre 9-11, the Guards gave me a visitor’s Pass and Up to the Offices I went, So long story longer lol a Mr. Dorr and a Ms. Kass (iirc) Gave me DOZENS of Kits & Folded Posters in Big Heavy Boxes lol Titles like “Star 80”, “Superman II”,“Excalibur” come to mind So I’m there picking up some Pics when the Lady who wrote a Weekly Feature called “Spare Times” Needed a Subject for the Article hilighting a Richmonder’s Hobby This lady turns to me as I sat indian style on the office floor going through some Stills not wanting to Shelp these Boxes home on the GRTC (Bus),when I’m approached to be the Subject of the next weeks Hobby/Crafts story So I run home telling my Mom and Stepdad this news of my impending 15 mins. They were only mildly amused (mostly cause at that time my normal teenage
Shenanigans had me on their Parental S**tlist!) But the following week when my Picture ran 8x10 Above a Half a Page Article I seemed to get taken a lil' more seriously by the Parents (The Actually Let me go to Midnite Shows that Ray had at the Ridge and I used to go down and spend many a Saturday afternoon watching Black Belt Soul Brothers and Disco Godfather (I swear these are REAL Movies!) Downtown. Ah but this is another story…lol
John

John, you were the best little poster groupie we ever had. Email me sometime at to catch up

I was involved in the insallation of the “Norelco” AA 70mm projector for a midnight showing of “Pink Floyd’s "The Wall” I also remember one of the five “Altec” A4’s speakers being dropped while being hoisted into position onto the behind screen platform. In addition the new 52' screen was also punctured while being hoisted. The 10' tall speaker was undamaged but a replacement screen had to be ordered.

This was the theater in Richmond in the ‘70’s and 80’s. I loved working Ray’s midnight movies, being a Relief Manage, and eventually being Assistant Manager to Mr. Jerry Norwood. Mr. Tom Connell was the original manager and a great man.

I worked with Tom Connell at the Willow Lawn, and with Jerry Norwood at the Colonial. I worked many of Ray’s midnight shows at the Towne and Colonial, and a couple at the Ridge.

to theaterboy, the Midlothian theaters your talking about exactly where was it located, I lived off Midlothian and Buford, are you talking about the one down past cloverlief cinema heading east on the right, im trying to remember where it was. I knew a couple that ran the cinema at the shopping center past cloverlief and always got their movie posters, still have some today.

You guys are probably a little older than me but not by much . I so enjoyed reading this thread. I tell my son who is film buff like me about Ray Bentley THE SCREAM MACHINE AAAAHHH…and the “a movie SO disturbing we will give you a free pass if you sit thru the whole thing !!” Lol…fill in the film ..so funny I remember the passes being handed out as we walked in . …the great films I saw for the first time at The Ridge. Thanks for sharing .