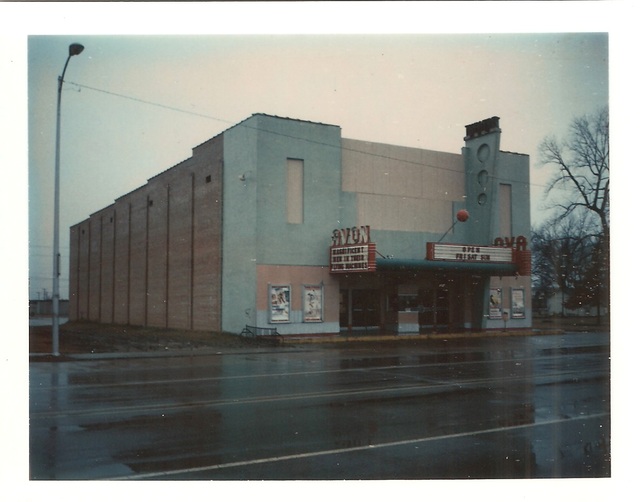 The Joy Theatre was opened in 1949 as a burlesque theatre. In 1952 it began screening movies and was renamed Avon Theatre. It was operated by Malco Theatres in the early-1960’s. It was used for wrestling shows and music before closing sometime in the 1980’s.

I am in the process of writing the history of West Memphis, AR and there are no good photos of this theater to be found. Ken McIntyre – any chance to get a better quality scan? Thanks!

According to a document prepared for Arkansas Preservation, the Avon Theatre was located at the southeast corner of West Broadway and Rhodes Street. The site is now occupied by part of a Sonic Drive-in restaurant. Prior to being taken over by Malco and renamed the Avon in 1953, the Joy Theatre sometimes presented live burlesque shows which had been banned in Memphis.

Fred and Zell Jaynes announced the $250,000 Joy Theatre in 1948. After the War, West Memphis was a major sin city destination selling liquor on Sundays and inviting adult entertainment. At the Joy, it was racy acts that couldn’t find work in neighboring Memphis and at the Crittenden and Harlem, it was playing films banned by the censor board there and African American films.

Jaynes' Joy Theatre launched as a burlesque house and advertised regularly in Billboard magazine hoping to find controversial acts when it opened in 1949. It was the first live house in West Memphis since the Strand – known more for vaudeville – burned down in 1935. The Joy had a main floor with nearly 1,000 seats for White customers and a balcony for African American patrons. Jaynes' burly house was too successful and finally on February 8, 1951, West Memphis Mayor P.M. Dacus shut it down as indecent.

Jaynes decided to sell the Joy to film interests who would convert the theatre to the Avon Theatre opening in 1952 to replace the undersized Crittenden Theatre. The Avon famously played the films banned by the notorious censor board across the river in Memphis. But when the MPAA created its ratings system in 1968, the marketplace for banned films was all but over in West Memphis. The Avon would get one more shot returning as a live acts venue.

West Memphis also had the Holiday Twin theater, a two screen indoor theater that was open from the early70’s and, I think, inot some part of the 80’s. It was in the Holiday shopping center, or so I presume.