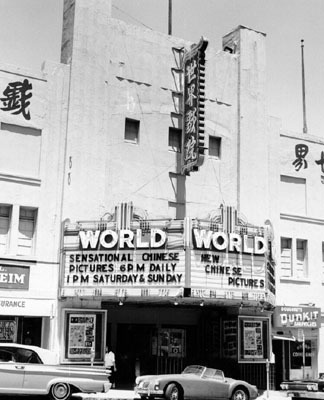 Opened as the Royal Palace Theatre on Broadway in San Francisco’s North Beach District in 1909. It was located across the street from the Liberty Theatre (qv). By 1912, its name was shortened to Royal Theatre, and in 1915 it was re-christened Verdi Theatre. At some time it was equipped with a Smith pipe organ.

For the next forty years it served the neighborhood with low cost third run films. In 1954, after the Liberty Theatre had been torn down, it picked up the name World Theatre, under which Liberty Theatre had operated for the last few years, and continued with a policy of foreign language films, soon focusing on a policy of Chinese films because of its adjacence to nearby Chinatown. As such it prospered up until the mid-1980’s, when it closed and was torn down.

A new retail structure was built in its place, which housed, among other things, a smaller ‘World Theater’ which lasted another fifteen years, also showing Chinese films, and has its own page on Cinema Treasures.

The Verdi was a single-screen theater.

The “new” small World Theatre mentioned in the main description retained the old Chinese charactered vertical neon sign from the previous World Theatre.
Canvas murals from the theatre’s days as the Verdi (presumably, as they had an Italian feel) were salvaged, and much later were offered for sale at Swallowtail, an antique store on Polk St. The price was steep, and the murals were quite large. They depicted neoclassic female nude figures in a romantic setting—foliage, foutains, columns or somesuch (I only saw them once, and this was nearly a decade ago). By the style of the painting, I would guess a Twenties or even Thirties date for them, but they could have been older. They were purely Neoclassic, not at all Art Deco, but the coloration and brush technique of rendering suggested the time period I speak of.

As a child, I spent many afternoons at the Verdi. My father was the manager during the 1930s & 1940s. Many a day I had to go into the bathtub at my home after visiting the Verdi in order remove my clothes and look for fleas. During WWII, my job was to take the burned out bulbs and break them in the adjoining alley in order to recover the copper bases for the War effort. Many happy moments were spent at the Verdi.

The December, 1919, issue of The Architect and Engineer listed alterations and additions to the Verdi Theatre among the projects slated for 1920 that were being designed by architect A. W. Cornelius.

According to “The Encyclopedia of the American Theatre Organ” by David L. Junchen, pg. 628, there was a Smith theatre pipe organ installed at the Verdi (World) Theatre in San Francisco at some point. No date or other information on the installation is given.

Does anyone know what became of this organ?
Thanks!

The WORLD Theatre is seen briefly in a night scene in “Dr. Goldfoot and the Bikini Machine” (1965).