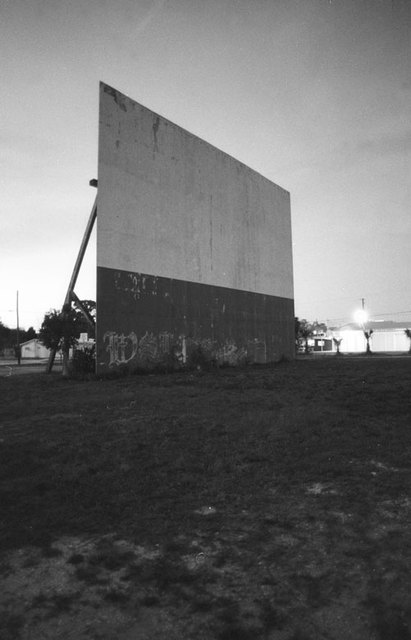 The Bradenton Drive-In opened October 7, 1947, featuring the 1940 crime drama “City of Conquest” with Ann Sheridan and James Cagney. It was opened by Raymond Combs and D.E. Fulford with a car capacity of 219 cars. In September 1960, hurricane Donna levelled the old screen tower. The drive-in was closed, and on February 26, 1961, it reopened with a new pre-stressed, precast concrete & steel screen tower. In January 1962, the drive-in was sold to Ben Cohen of Holiday Amusements for $30,000. They also owned the Garden Drive-In in St. Petersburg, FL. They spent $20,000 to modernize the theatre.

In June 1970, a letter was received by the city council about showing lewd movies at the drive-in. Police Chief Harry B. Wilkison talked to the theatre’s district manager about the movies. The manager of the theatre firm flew down from Atlanta and assured him that there would be no more objectionable movies. He said the movies were a one shot seal and the plan is to keep the drive-in as a neighbourhood type of theatre. I could not find what company from Atlanta, GA was operating at that time.

The Bradenton Drive-In was closed in 1988 and the screen tower was demolished. It is now Pinnacle Self Storage units.