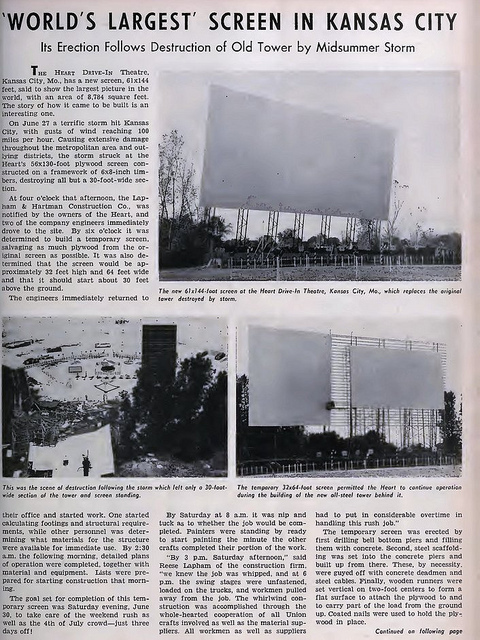 The Heart Drive-In opened on May 8, 1953. Car capacity was listed at 990 cars. It was the first drive-in to be built within the city limits.

Yes, it was a swap and shop thru about 1983….my brother Ray used to set up out there quite often. I took a photo of two guys selling out there for our yearbook in high school…winter of 1982. the old entrance is now a junk yard I believe…and the rest of it is empty land.

I didnt realize that this Drive in was opened til 85. I would have swore it closed in the late 70s or very early 80s.

Aprrox. lovation for this drive-in was U.S. 40 east of I-70. Part of the outline is still there.

The screen was still up for a long time afterwards, but finally torn down maybe 10-15 years ago. I believe some of the speaker posts still remain to this day.

JWMovies is correct, in part. The Heart Drive In was located along Highway 40, even before I-70 was built. It had a playground at the front, underneath the screen. There was a creek that ran behind it, and the mosquitos were awful!

I’d be happy to give all the information you would like regarding the Heart. My father ran this theatre for many years until its closing. So many memories :–) So those of you know; the corp of engineers purchased the property to correct the flooding issues from the Little Blue River.

would love to hear any of your stories kc!

At approximately 10pm Monday, July 22, 1974—during a triple-feature of THE EXORCIST, SUPERFLY T.N.T., and ROSEMARY’S BABY—the assistant manager and another employee were robbed at the theater’s entrance booth, with the asst. mgr. shot & grazed in the left thigh and struck four times on the head (he was treated at Osteopathic Hospital), and the two locked in his car trunk (police removed the car’s back seat and freed the victims). A ‘Major Studio Sneak Tonite’ commenced normally the following evening however, John Berry’s film CLAUDINE. [“Drive-In Holdup Violence”, Kansas City Times, Wednesday, July 24, 1974, pp. 8A]