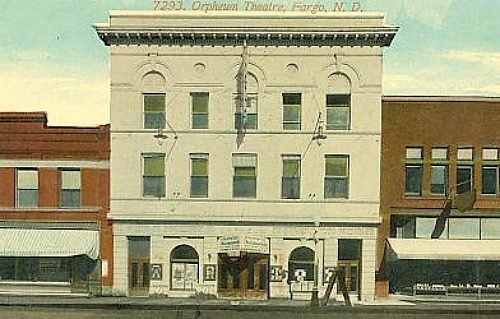 Opened in 1896 as the Fargo Mercantile Company Building, this three-story structure was purchased in 1909 by a group of local businessmen who converted the building into the Orpheum Theatre, which sat about 1000.

It was a vaudeville house (with an occasional film being shown, like 1915’s "Birth of a Nation", which played to a packed house) until 1921 when it was sold to the McCarthy Brothers, who began showing movies on a regular basis. Four years later, the Minneapolis-based American Amusement Company took over the theater. By the early 30s, it was closed, and not long after, a shoe repair shop took over the lobby space.

The former Orpheum was used on and off for retail space until 1960, when it was razed to make way for a parking lot.

Here is a link:
http://www.fargo-history.com/downtown/orpheum.htm

An item in Boxoffice of February 3, 1940, sheds light on the fate of the Orpheum. Minnie Hector Smith, who had until 1936 operated the Orpheum under a lease, had filed suit against the Minnesota Amusement Company, charging that the firm, operator of rival theaters in Fargo, had in 1936 leased two-foot strips on either side of her theater and denied her access to the space, thus blocking the Orpheum’s emergency exits, and the theater was forced to close as a result. I’ve been unable to find anything about the outcome of Mrs. Smith’s lawsuit.