In 1965 my cousin and I drove across the country to see the World’s Fair in NY. On the way back we stayed with my mother’s cousin in Dayton and went to this theatre and saw Crack in the World. As soon as I walked in I wished I’d brought my camera. Not many people there for a weekday matinee so I roamed the theatre marveling at the marvelous (Rapp and Rapp?) architecture. It’s a shame it couldn’t hang on. 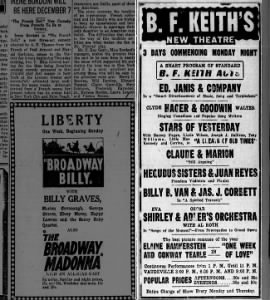 After reviewing the useful links above, I am having a hard time determining whether the photograph you can see here of Keith’s Theatre at:
View link
is the Keith’s in Dayton, Ohio. The photo was made I believe between 1928 and 1931. If it is not that in Dayton, would visitors have any idea which Keith’s it might be? Many thanks in advance. Inesita da Silva

Correction on the link in the previous posting about the organ restoration project:

Chevalier Theatre is not listed on CT because it never was a movie house. It originally was built as the auditorium for Medford High School. After a fire at the high school in the late 1960s, the high school was converted to condos but the auditorium was preserved and remains a municipal building. www.chevaliertheatre.com

The article reference about the organ restoration can be found here:

And to read about this grand and opulent theatre that was once in Dayton Ohio, but was eventually demolished truly breaks my heart.

Found this link after reading the CT news story about the organ out of this theatre and is now in Mass. being restored by the Chevalier Organ Society. I don’t believe the Chevalier Theatre in Medford Mass. is listed on CT.

The site that features the demo photos is down and I’d like to view them though it is never easy to look at such mistakes! Can anyone find and post them?

I worked at the RKO Keith’s theater from about 1945 thru about 1947. Also
worked at Loews off and on. In those days, both theaters posted “barkers"
from time to time. I enjoyed barking. Many times we had crowds in-line waiting to get in for the next movie.
When Guy Lombardo came to Keiths, we had hugh crowds waiting to get in during weekday late afternoon shows. When Louis Prima played few showed up
and he got bad reviews.

Was the Strand organ destroyed in the fire? Thank you. To view photos of the ongoing restoration work of the Dayton RKO Keith’s theatre pipe organ, now located in Medford, Mass., near Boston, visit www.chevaliertheatreorgan.org

Dayton still does not have a theatre equal to the RKO Keith’s Theatre, which was only magnificent.
The Strand Theatre was on South Main St. burned down in the 1940’s It was an old legitimate and Vaudville theatre and later switched to movies. My organ teacher said that the pipe organ in the Stand was her favorite in the city.

Hey, folks. I am new to this site … a Dayton native. I was too young to remember the Keith’s … but my parents mourned it’s passing for a long time.

We have watched all of the great Dayton movie-houses fall … even later (lesser) nice spots like the Dayton Mall 1.

When Peter Jackson’s Lord of the Rings premiered a few years back, I was stunned to find there wasn’t a single “big house” within a day’s drive to see it. I had planned to travel up to five hours to see it on a “real” screen (being such a fan of the books) but had to settle for a Showcase (National Amusements) wannabe.

The photo archives in the Dayton Room at the main library (actually it is no longer an actual “room”) probably have a good deal of photographic documentation of these theaters. Also, the NCR archives likely have a good bit.

I saw films at the Victory (now the re-born Victoria) as a kid, as well as at McCook’s before it was a porn-shack. We need to get the old “Elite” from Troy Street listed here. Here is a very nice link where you can read an entire book online about Dayton theaters:

Near as I can tell, this is pretty much an exhaustive work on the subject.

This Theatre was designed by Rapp and Rapp.

These are the most heartbreaking photos I have yet seen on this site. I’ve never been to Dayton but I feel like crying anyway. Thanks for the eye-opener.

The Chevalier Theatre Organ Society in Medford, MA, is raising funds to refurbish and install the 1922 Mighty Wurlitzer Theatre Pipe Organ that was salvaged from RKO Keith’s Theatre in Dayton. Does anyone have a photo of what the organ looked like in the Dayton theater? Thank you.

Very interesting link, Where did you get these pictures? I have been looking for interior shots of Keiths, Lowes, Colonial and any other Dayton theaters but have not had much luck.

Here is a link to some pictures I have of the demolition of the Keith’s and Loew’s theatres in Dayton, Ohio.

This is the wrong picture for the RKO Keith’s. This is actualy a picture of the RKO Colonial.