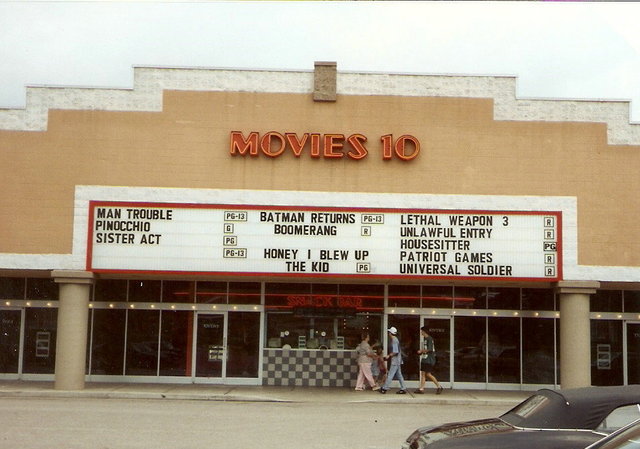 Built to the plans of Premiere Cinemas in 1990, it was taken over during construction by the Cinemark Chain. Showing first run attractions.

This theatre received a mini remodel in Spring 2010 which included a new concession stand, new storefront doors, a new roof, new carpeting throughout the facility, a much-needed repaving of the parking lot, and a fresh paint job on the exterior.

Sure the theatre was never a Carmike? Looks suspiciously like one.

This theatre was originally planned by Premiere, but taken over during construction by Cinemark and slight alterations were made (the original plan had the concession stand as a horse shoe attached to the box office). It was opened as a Cinemark Theatre, and always known as Movies 10. The only place I ever saw “Cinema 10” was on the original blue prints.

I was transfered to the Movies 10 from the Richmond Mall Movies 8 about 2 months prior to opening during construction, holding the positions of Projection Manager, Assistant Manager & Manager. There was an attempt by Lowes to purchase this theatre, the Richmond Mall Movies 8, Greentree 10, Lexington Green & Man'o'War Movies 8 in Lexington, Kentucky. That was in the beginning of 1991, with the deal being cancelled around June 1991.

It was the same Premiere design as the Greentree 10 (Clarksville, Indiana), Springfield Square 10 (Mansfield, Ohio) and the Richmond Mall Movies 8 (Richmond, Kentucky) but the Richmond Theatre had the four smallest theatres on the left and right removed, and what would be screen 10 (now screen six) divided into three. There was plans for another 10 screen design in Hurricane, West Virginia that was never finalied by Cinemark.

A major remodel took place at this location in Spring 2016. Upgrades include an exterior paint job, all new exterior signage, all new wall treatments throughout the lobby, corridors, and auditoriums, all new seats, new surround speakers in every auditorium, a brand new box office, new digital signage in the lobby, concession stand, and corridors, new carpeting throughout the building, two new ticketing kiosks, and several miscellaneous ADA related improvements. Lane dividers and an Icee machine have also been added to the concession stand.

Kevin, it sounds like the same improvements they made to their Hazlet 12 in Hazlet NJ about a year ago. Did they put in electric recliners like Hazlet??

No. The new Ashland seats are high back leather rockers. The new Hazlet seats are Cinemark Luxury Loungers.