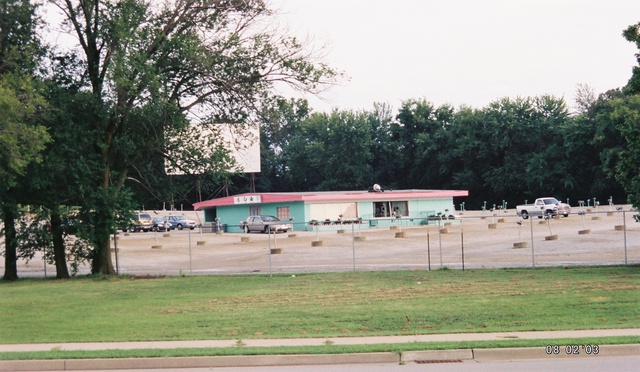 A storm destroyed the screen in 1960 and after being rebuilt the drive-in continued operating until September 10, 2005 when it closed. It has since been demolished. Any further information on the Starlite Drive-In would be appreciated.

Thanks for the info Mike.

The Starlite actually had 2 screens and a playground under one of them where you could play before the movies started. And the window speakers were operational way longer than any other drive-in in the area. I don’t recall when they switched exclusively to radio transmitted audio, but it was probably the late ‘90s.

The concessions house you see here was also widely accepted to serve the best fried chicken in town. People would regularly come just for the chicken. You could tell the folks in the booth that you were picking up chicken and they’d let you drive in the exit, get your chicken, and drive back out. And I never heard of anyone saying they were going for chicken and stay for the movie without paying.

The Starlite has been demolished and the new Henderson fire station was built in its place.