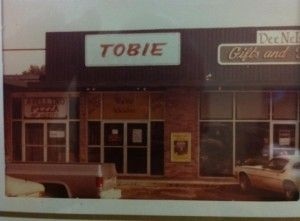 The Tobie Cinemas opened as a twin in the late-1980’s. It was made into a four-plex by 2009. The theatre features first run attractions.

Any further information on the Tobie Cinemas would be appreciated.

There was a single-screen “Tobie” in Senatobia operating in the 1970s. So, unless this is a completely new and different theater using the same name as an earlier venue, this opened as a single-screener in the late-1960s or early-1970s.