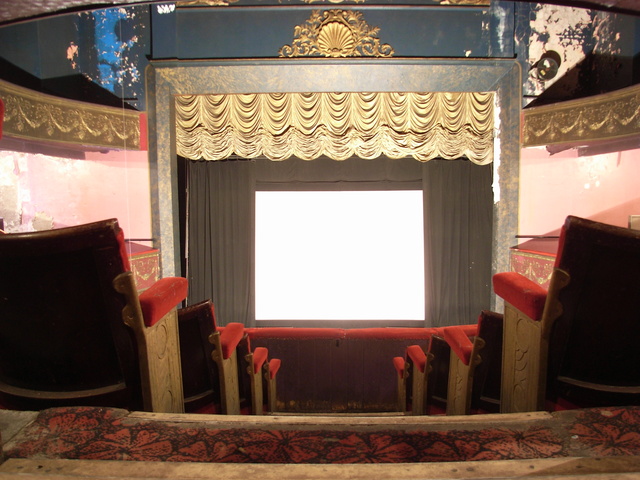 Opened as a live theatre on 3rd November 1902, the New Theatre Royal had 1,200 seats located in orchestra stalls, and dress circle and balcony levels which curve around the auditorium returning to the proscenium wall. It has a stage 35 feet deep with ten dressing rooms and the proscenium was 28 feet wide. It was leased as a cinema from 1914 when it was renamed the New Royal Cinema.

It was equipped with a Western Electric(WE) sound system in 1929. stayed as a cinema for most of the time - a repertory theatre company was set up for two years in 1950. Pantomime and occasional weeks of shows - usually variety - were regular features throughout. In the 1950’s it was operated by the Brennan’s Cinemas chain, followed by the G.B. Snape Group of Assoc. Cinema Companies circuit.

However this ended in October 1972 when the stage area was converted into Cinema 2 leaving the original auditorium as Cinema 1 in very nearly its original design (the proscenium had at some time been widened).

Both cinemas closed on 17th January 1995 and demolition was only just averted by the building gaining a Grade II Listed status in April 2000.

Restoration as a theatre was mooted - as had reopening as a Asian cinema for the sizeable local Asian population, but the building remained unused.

In May 2019 plans for conversion into a mosque were rejected because of alterations to the building which included demolishing the stage house and building a glass wall inside the auditorium and ‘covering up’ decorative details as well as segregation of men and women in the building. However, in December 2020 approval was granted and by 2021 it was in use as the Masjid at Tawheed Mosque and Hyde Islamic Resource Centre.

Is all that stuff REALLY still inside? The projection box looks as though it was last used yesterday!

Latest news is that the LTOT Lancastrian Theatre Organ Trust is looking to install the ex Davenport Compton theatre organ into the Theatre Royal Hyde. This is really exciting news which I hope comes off.

This is now a mosque.