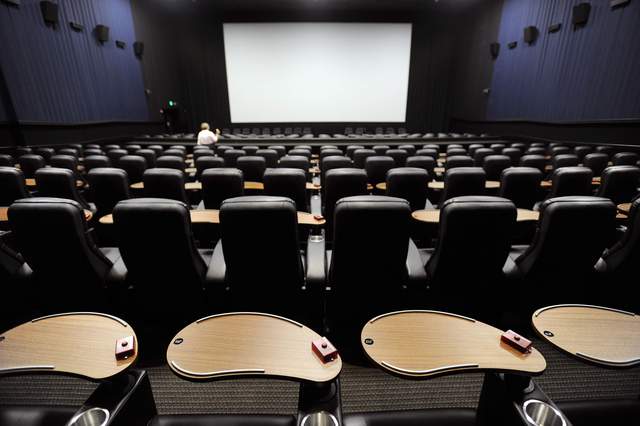 General Cinema opened University Square Cinemas in two stages. Cinemas I & II opened on October 18, 1974 with "The Longest Yard" and "The Way We Were." Cinemas III & IV followed on November 15th with "Gold" and "The Trial of Billy Jack." Cinemas 1 & II were located at the front side of the mall facing Fowler Avenue and Cinemas III & IV were at the rear of the mall. GCC had originally planned a two-screen cinema for this location but when another tenant at the rear of the mall backed out, the space was acquired by GCC and an additional two screens were added.

Capacity was 1,810 with cinema I seating 500, cinema II 350, and cinemas III & IV 480 each. This four-screen complex was GCC’s third venue in Tampa, and that chain’s first brand new theatre built exclusively from the ground up following their acquisition of the Britton and Austin Cinemas. All four cinemas were managed by Tony Koudouna who was quoted on opening day as saying, "these theatres will show both first and second run movies depending on supply. Cinema I seats 500 and will feature the movies expected to do the most business." Cinemas I & IV received Dolby Stereo installations sometime the mid-1980’s.

These theatres were the standard GCC design of the 1970’s with blue lobby walls, white lettering, red carpeting, white pushback seats with red cushions, light grey panneling on auditorium walls, and bare screens. The free-standing box office for cinemas I & II sat a few feet from the theatre entrance in the mall. The lobby was small and cramped with barely any room for more than just a few patrons at a time. The large cinema I was on the left and the smaller cinema II on the right.

Cinemas III & IV at the rear had an indoor box office as well as a second concession stand. There were two or three steps at the entrance to each auditorium followed by a ramp leading down into the theatre. The screens in each of the four cinemas varied with the average width being about 35 feet wide.

These films I recall seeing in cinemas III & IV: "Halloween" "The Legend of Boggy Creek" "The Medicine Man" "Out of Africa" (I walked OUT on this one) "Grease" and "Saturday Night Fever" (double feature) "Micki & Maude" "Airplane" "Hairspray" "Tales of Terror" (1963 re-release) "Creature from the Black Lagoon" in 3-D and "The Rocky Horror Picture Show."

During the 1970’s and through most of the 1980’s all four screens usually featured special midnight shows every weekend. These were popular second-run films, cult films, concert films, and off-the-wall films.

Cinemas III & IV achieved local fame as the original home of "The Rocky Horror Picture Show" which ran for an astounding 11-plus years every Friday & Saturday at midnight. Showings would alternate between the two cinemas during regular weekend shows. For Halloween and yearly anniversaries the film played in both cinemas to sold-out crowds. The long engagement began on April 21, 1978 and ran through February 11, 1989 when the film was unexpectedly pulled without warning.

Bob Ross, the Tribune’s film critic published an article on the abrupt cancellation (Bob, if you’re reading this I give you full credit for your story!!)

It’s gone. "Rocky Horror" the movie we took for granted for more than a decade has been pulled from its Bay area home screen. You knew it would be there. It’s always been there. Friday and Saturday, midnight, University Square. The movie’s full title is "The Rocky Horror Picture Show." When first released in 1975, it didn’t do much. Somehow the audience lingered, grew, and recruited more audience members. Midnight screenings turned into a tradition. Groups formed to act out key characters roles in sync with the screen action.

Audience participation threatened to make these events too rowdy to continue. Theatre crews grew tired of cleaning up bread, rice, water and other debris scattered by ritual cultists. Reason has prevailed in recent years. Foreign substances have been kept to a minimum and audiences have continued to make the twice-weekly pilgrimage, singing with the sound track, making clever ritual responses to favorite bits of dialog.

But "Rocky Horror" has left us without warning. Saturday night was its unannounced finale. On Monday, word of the regional decision came down to Tony Koudouna, Tampa-based divisional manager for General Cinema, the giant chain of which University Square is a link. Koudouna, who was once the manager at University Square, has a certain fondness for "Rocky Horror." "I think I was the first manager to bring it in there" he recalled. "Here, I can check the records…well, last week was the 575th consecutive week. That’s more than 11 years."

For 11 years you could count on "Rocky Horror" playing midnight at University Square. Now it’s gone. Without notice. History. "It was a quick decision as far as we knew," Koudouna acknowledged. "It came from the regional office in Atlanta. The midnight movies were pulled in all the regional theatres. "Rocky Horror" was playing in a few other cities, I believe. We’d had no problems with it here. It was just a regional decision." Koudouna predicts that late-night screenings will be reinstated, but that "Rocky Horror" will not be part of it.

Will this incredibly durable cult classic return to a bay area screen any time soon? Remember, "Rocky Horror" remains among those rare old movies that are not available on videocassette. The midnight movie market made it worth 20th Century Fox’s while to keep the title strictly in theatrical release.

The film eventually found a new home at the Hillsboro Eight Cinemas where it played for several months in addition to showings at several other theatres.

University Square Cinemas were purchased by Cobb Theatres in the mid-1990’s and the decision was made to expand the complex to 16 screens. The last day of operation for cinemas III & IV was on September 2, 1996 with the final features "Carpool" "Bordello of Blood" "A Time To Kill" and "Independence Day."

The expansion took place at the rear of the mall with a new building constructed next to the parking garage. During this construction phase cinemas I & II at the front of the mall remained open through December 12, 1996. The final features were "101 Dalmatians" and "Daylight." The building has since been renovated for a number of uses including a restaurant as well as various shops. No traces of the former cinemas remain visible.

The new 16-screen building was joined with the lobby of the original cinemas III & IV which were absorbed into the new complex and completely renovated. The new Cobb Theatres University 16 opened on December 13, 1996 and was in operation until September 3, 2010. Entrance to the theatre is now in the food court on the second floor.

The larger cinemas in the complex were used occasionally for classes by the University of South Florida. Regal owns and operated the complex. It was taken over by Frank Theatres in 2011. It was closed on January 6, 2013. It was reopened by Studio Movie Grill in October 2014 using 14 screens. it was closed in March of 2021 and was taken over by LOOK Dine-In Cinemas, reopening in September 2021.

Wow! Mike and Chuck. I worked for the Franks for 6 and a half years and my last assignment was University Mall 16. I was “laid off/ let go” in July because my payroll costs were not 8%. My replacement made $900 less a month and all he did was ‘babysit’ the location. I promoted the location with radio, had Spiderman running around the USF campus and the mall, Men in Black men walked the mall and that video is on U tube, merchant promotions with Blockbuster Comics, Chik-fi-la, Subway. USF students tended to stay away and go to Muvico where it was safer. This theatre should never have been reopened. I made recommendations to upgrade the theatre by taking down walls for larger theaters (most of the screens were too small and had complaints about), USF students $5 at all times which they did after I left. I also recommended that they take the JC Penny building and retrofit it. In the end, this theatre is history and a IRS write off.

I happen to know for a fact that the most recent GM and his team did their best with that location, they promoted movies, created displays from scratch, and overall made it a great experience.

The theater was a joke. One of the auditoriums downstairs was used as a church for a while. It smelled bad too. The mall is so far in debt that I don’t think any theater could make a go of it. When we moved at the end of Feb. it still had not been boarded up.

It was announced today that Studio Movie Grill will be taking over the theatre space left vacant by Frank Theatres in January, 2013. The next few months, renovation to fit the concept will happen. SMG plans to open 14 screens.

Dallas based Studio Movie Grill has just opened an upscale 14-screen dinner-with-a-movie theatre in the former Frank Theatres space that has remained vacant since closing in January 2013. Although the location is questionable here’s hoping they can make it work.

Link to article with photo: http://tbo.com/news/business/studio-movie-grill-prepares-for-opening-at-university-mall-20141017/

This weekend if you bring 2 can food items they are giving free movie tickets..

I just hope that they don’t tear the mall down around such a nice new investment… and as the area is just so nice I hope they don’t destroy it!

Since the mall is closing and will be demolished what is the future status of this theater. It has been through so many chains.