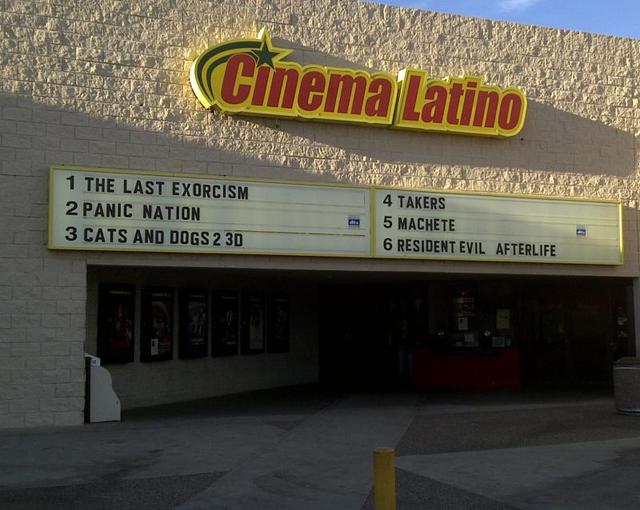 Opened by General Cinema on May 21, 1982 in was located in the Westridge Mall in southwest Phoenix. This non-stadium style theater features six smallish auditoriums that show first-run films either with Spanish subtitles or dubbed in Spanish. They recently installed a 3D projector in one of the auditoriums. They cater to the Hispanic-American crowd and are very popular, especially on Sunday afternoons, although they don’t draw the crowds they used to. It’s fun to watch the patrons, especially the young men dressed in bolo ties, cowboy hats and pointy cowboy boots.

2003? Spanish subtitiles or dubbed in Spanish.

Don’t they show any made in Spanish Language films?

I believe this was previously a General Cinema Theatre.

I worked as an usher here in 1988 while going to college. There are/were 2 ramps (from the mall & exterior entrance) that lead down into the center snack bar. Which is circular shaped. And the theaters were split into 2 hallways, 3 on each side. I remember 3 Men & A Baby playing for most of that year, I can still recite the dialogue of the last 5 minutes. We also had midnight movies on the weekends, including Rocky Horror & Heavy Metal. At some point, I was allowed to make popcorn, which was made upstairs in a room next to the booth. We popped about a week’s worth of corn and stored it in plastic trash bags, yumm.

They’re now called Sonora Cinemas — same management, though, I believe. They’re in the process of renovating the lobby and adding several new auditoriums.

Harkins Theatre rebooted the location as the Harkins Westridge Mall 6 on May 5, 1995. It was then renamed as the Harkins Desert Sky when the mall changed names. Harkins closed the venue after shows on January 30, 2003.

Colorado-based Sonora Entertainment Group used its Cinema Latino nameplate when it took on the venue renaming it Cinema Latino de Phoenix with a grand opening on November 13, 2003 including the Spanish-languge, “Lucia Lucia” and “El Crimen Padre Amaro” both shown with English subtitles and several dubbed major Hollywood films. The mini-circuit had recently closed in Las Vegas and Colorado Springs, but had its Aurora, Colorado and Fort Worth, Texas locations running.

Sonora filed for voluntary Chapter 7 bankruptcy protection on August 6, 2020 leaving an uncertain future for the locations which remained closed into 2021.