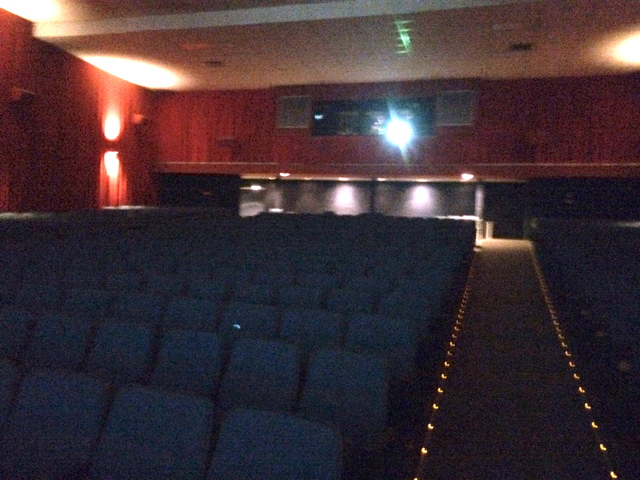 The Factoria Cinemas were built on the site of the Sunset Drive-In. It originally opened with 5-screens.

I Worked on a reno of an old Loews last summer. Sorry to say it will be AMC looking thru out. We put in new screens, new drapes, new carpet, new concession. You wont recognize it.

Always was a nice place. Keep it open for the next few years. Too many ugly huge office buildings in Bellevue.

Sorry I am not TSilver729 but I know the answer – there was no twinning involved. Each addition was an addition to the original building. At first glance on the exterior and interior you would never know. But when you go into each auditorium you get 3 distinct styles depending on what wing you are in. I am hoping that when AMC installs the new seats they preserve the curtains on the walls of the auditoriums. Probably depends on how much investment they want to commit to the theater.

4 screens appear to be reopening this weekend with recliners.

just in time for star wars

Saw Star Wars last night at the renovated Factoria Cinemas. Fully AMC-ized now. Nothing SRO left. Box office has been moved inside which its good. Lobby makes more efficient use of the space and is very AMC-clean in design. My showing was in #2 (the 2nd largest auditorium). House lights were on so I got some good photos. Auditoriums were gutted and the recliners were put in on a stepped slope (at least in 1 and 2). 1 and 2 retained 2 aisle/3 section layout. Peeked in #5 and it is now 2 aisles on the sides and one central seating section. #3 should mirror that. #4 retained its layout. Just with less seats. The entries to 3, 4 and 5 have been reconfigured.

Now to the screens: although hard to tell with screen #1 with my peek in, but it appears all screens are now common width and no masking! All the films playing in 2, 4 & 5 were scope and letterboxed within the screen. The screen in 2 also had rounded corners with the screen wrapped snug around the piping. Slight curve to it as well. These screens used to have moveable side masking (though the smaller 4, 6 & 7 had side masking but with the top masking movable to make flat a little larger). Flat will certainly be much larger now as the screens appear taller than they used to be.

The hall to 6, 7, & 8 was closed off and still under construction. Still a lot of work to be done on the exterior. The place was supposed to be open earlier than this but they must have fallen behind. There was evidence of hastiness in getting to this soft open: staples showing in wall curtains, molding not yet in place, construction boot prints in the restroom. Certainly wanted to cash in on Star Wars. Although I am opposed to unmasked screens I will still bring my kids here. Easy access off the freeway and lots of free parking. I am saddened by no trace of SRO being left but still glad the Factoria lives on. SRO-feel can still be experience at the SIFF Uptown and AMC Oak Tree in Seattle.

Side note: Are unmasked screens the new thing at AMC? The newer stadium AMC theaters I have been to all had proper masking (although the dreaded common width top-down variety) aside from LieMAX.

Unmasked screens are the new thing at AMC when they renovate (at least for fixed-width screens). It’s an entirely unwelcome development, but at least they aren’t decommissioning the masking at existing/non-redone venues like Regal is. (Who decided this was a good idea, I have no idea.)

In what year did Factoria expand from five to eight screens?