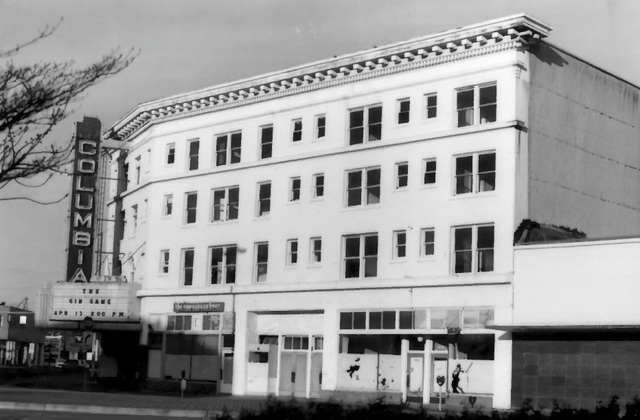 The Columbia Theatre was originally opened as a vaudeville and silent film house in 1925. It continued as a movie theatre for many years, and was actually scheduled to be torn down in 1980. However, it was saved and renovated to become a live performance venue.

The Columbia Theatre is a beautiful reminder of Longview’s history and serves as a center for the performing arts.

Back in the early 1990s, they had a special event to re-open this theater. I went with a friend. They did some live vaudeville acts, and then showed the 1925 silent file “The Phantom of the Opera” with Lon Chaney. The film was accompanied live by an organist and a few other instruments.

It’s a really beautiful theater. The company that was responsible for the renovation has a nice photo of the interior.

At one time this was operated by Tom Moyer’s Luxury Theatres.

The Columbia was never a Moyer theater. The local owner sold to Sterling (SRO) after WWII. SRO sold it to the City of Longview in 1983. The city leases it to the nonprofit Columbia Theater Association for the Performing Arts.

Functions should also include: Movies (classic)

The records of architect Day Walter Hilborn list a remodeling of the Columbia Theatre in Longview as a 1936 project. There’s no indication of how extensive the remodeling was.