Seating capacities at this theater (via Fandango’s reserved seating service):

Recently in the news, the developers have backed out of the plan I described above. Their stated reason was the insistence of the county that the project include area road improvements and park land / green spaces over and above what what the project included. They said the county requirements made the project economically unviable. This kind of thing happens on every big development proposed in this town although it is rare that someone calls the governments bluff and walks away.

Time will tell if they come to some sort of face saving compromise or if some new player enters the market. This is one of the few areas of DeKalb that has not incorporated so if the city of LaVista Hills ever comes into being the attitude of a new zoning board may be different. Meanwhile, what is left of the first enclosed mall in Atlanta continues into its 55th year.

That is a shame, even though I was from Cobb, I liked N. Dekalb Mall. When I read that Rich’s (oops “Macy’s) was closing down I knew it would be the end eventually, such a shame. I think the worst part of the destruction of Atlanta is that there is never any significant fanfare, it just disappears. When Perimeter closed it was a whimper, not that it was the showplace it once was, but I think a lot of folks would have gone to one last show had we known it was coming. I know everyone I knew in the late 70’s saw at least one midnight movie there regardless of what part of town you were from and had great, if fuzzy, memories of it.

Article in today’s paper reports that the mall owners have decided that the days of enclosed malls are over and that they are going to tear this place, Atlanta’s first enclosed mall, down. In its place will be built yet another “Town” concept development. It will have eating, retail, offices, apartments, and a Costco. It also said that the AMC Theater will remain but did not specify if the current theater would be incorporated into the center or if it would be rebuilt in another part of the development.

If this comes about it means that the original mall (and Storey Theater) lasted 21 years, and the Market Place rebuild with its Cineplex-Odeon 4 / AMC 8 / AMC 16 about 34 more. 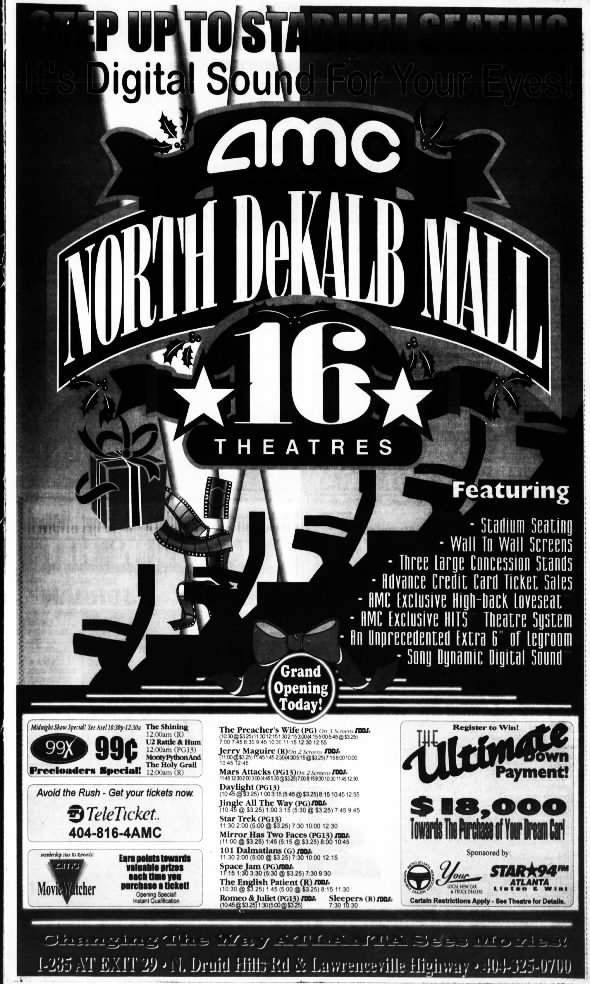 Since those are pretty standard AMC designs of the time, I assume that AMC remodeled to match the additions just without stadium.

Upon review of the photos on Cinema Tour, the non-stadium auditorium(s) photo(s) does not have the trademark Cineplex Odeon decor of the 80s four-plex. It is possible that these are the same auditoriums and that AMC just remodeled the interiors to match with the newer additions added when it was expanded to 16.

Maybe it was first expanded to from 4 screens to six, then the other section with 10 screens were built. My local AMC Classic (formally Carmike) has a similar set up. There are four screens in a row in one hallway that was built along when the mall was built in 1980, and around 1990 another section was built with 4 theatres on each side of a new separate hallway.

Picking up on various comments made on various North Dekalb pages here on CT, I visited the AMC 16 earlier this year and do strongly believe that the Market Square 4 is part of this 16-plex. This theatre after entering the lobby, to the right side of the snack bar are four slope-seating theatres. To the left of the snack bar is a long hallway that connects to what is essentially a 12-plex stadium style theatre. Pics soon to be up at Cinematour.com

I CAN’T stand AMC. Why wasn’t I snapping pictures of the original NORTH DEKALB MALL theatre when it was a single theatre and the entry way was from outside. That was a beautiful theatre. Saw many wonderful movies there starting with OLIVER! and then WILLY WONKA AND THE CHOCOLATE FACTORY.

Who was it that said, “growing up in Atlanta is like watching your past hauled away in a dump truck”??

No appreciation for nostalgia.

Americans bitch and complain about job loss and the economy, but they did it to themselves by funding and pouring their money into corporations rather than privately owned sectors. Horrible stores like WALMART and Costco.

Wow! Raymond Stewart returns!!! Good to see your comments after such a long absence. If you have not been keeping up then you should check out the Miracle and Belvedere pages.

As for this theatre, it is kind of in a gray area as to if it already has a page on this site. The original North DeKalb does:

There are many interesting comments there. That theatre was built as a single, twinned in 1975, and torn down with a good part of the mall in the late 80’s. What was not torn down was gutted and an entirely new mall built and opened under the name of Market Square. The Cineplex 4 was known as Market Square and was in a different spot from the original Storey theatre.

I do not know the rest of the story. The 4 might have been expanded to 8 or just split. As to the AMC 16 I do not know if it includes any of the 4 or 8 or maybe it is an entirely new construction.

To answer Bob’s question, yes they were all built in the mall, but nothing sits on the site of the original theatre which was really just attached to the mall and had its own outside entrance.

Anyone interested in theatres in what is now North DeKalb Mall should look at the other page I linked to above.

All theaters on the same site?

Built in place of a defunct department store and utilized some space from a previous 4 screen location. I seem to recall the 4 screen (Plitt I think) replaced and older property that was a Storey property. I once saw it referred to as “forest green” theatre in an article about AMC’s expansion to this location.