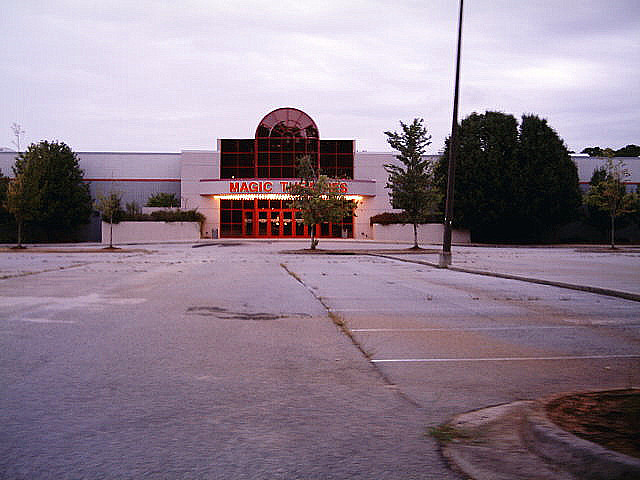 This Magic Johnson Theatres was built just outside the Greenbriar Mall and was opened by Sony Theatre on November 15, 1996. It closed in 2011.

Itâ€™s been 13 years since Magic Johnson opened the theatre bearing his name at Greenbriar Mall on the southside. THIRTEEN dayum years! Nowâ€¦after all that time, the 12-screen movie complex is shutting itâ€™s doors for good. I remember when the theatre first opened itâ€™s doors, giving all on the southside hope that it would help bring the ailing mall back to life. It seemed to work for a minute, since the theatreâ€™s location was combined with Magic Johnsonâ€™s TGI Fridays. But after a few years, the restaurant disappeared as well. It was boarded up for a while then reappeared as another restaurant and now itâ€™s a club (Pearle Bistro). I don'tno what it is about Greenbriar
but stores/restaurants/grocery stores have all come and gone and itâ€™s still an Atlanta staple.

News that the theatre is closing hurt my heart but I understand that business is business. Magic Johnson Theatre at Greenbriar faced stiff competition once the theatres at Camp Creek Marketplace opened itâ€™s doors and it seemingly never recovered. What we all feared would happen is happening. Good news for Camp Creek, but devastating to all around Greenbriar Parkway. After JC Penney left the mall empty for some time and finally Burlington settled in. Circuit City came and went leaving an emptly building and so did Cub Foods. Now this. Iâ€™m just hoping that our beloved Greenbriar can recover from this huge blow.

In case you want to visit the theatre one last time, you have until Sunday, October 11th 2009.

AMC spokesman Andy DiOrio said the company has closed a handful of theaters nationwide this year as it seeks to upgrade or close aging theaters.

â€œWhile we understand and appreciate that communityâ€™s affinity with that theater, we also have two others in that vicinity, AMC Parkway Pointe 15 and AMC Southlake Pavilion 24,â€ he said.

I checked the theater website . there are no showtimes listed

The status of this location should be changed to “Closed” probably for eternity. Roughly speaking, the original mall theater lasted about 25 years, 10 as a 1000 seat single and 15 or so as a twin. This parking lot location lasted about 15 years total although it was closed in between some of the different owners.

This opened as Magic Johnson on November 15th, 1996 by Sony Theatres. Ad in photo section.

From the late 60’s to the mid 80’s it was not unusual for a projectionist to work at almost any booth in town. Even those of us with regular booth jobs would find ourselves covering off days, sick days, and vacations all over the city. Those were fun times, but by the time this Theater came along, those days were long gone.

While I worked the original mall theater many times, I was never inside this place. However I did know the Tech who did the booth maintenance and repair since he covered almost every theater in town. He told me that when “The Passion Of The Christ” opened the MJ did a massive group sales effort among the churches in SW Atlanta. The week the movie opened he was called in to do a check out of the interlock system which would allow up to 6 screens to run the same movie.

On the Saturday morning following opening day they had a group sales event where they ran their two prints in all 12 houses. While they did not sell every single seat, the place was packed.