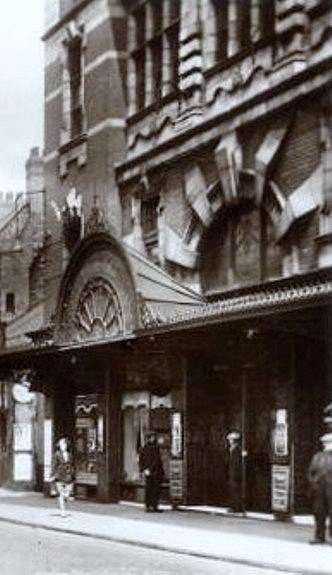 The Grand Theatre & Hippodrome was opened in early-1908 as a variety theatre. Designed by the architectural firm Prescott & Bold of Wigan, it had a 32 feet wide proscenium, and a 39 feet deep stage, with six dressing rooms. Within months of opening it was presenting cine-variety. Eventually, after live shows ceased, a projection box was built on the stage, and films were projected via rear projection. In 1939, the interior was completely re-modeled in and Art Deco style, to the plans of architectural firm Gray, Evans & Crossley of Liverpool.

Converted into a twin screen cinema in the mid-1970’s, seating was provided for 392 seats (using the rear projection box) and 228 seats in the former circle (using a newly built projection box).

In 1984, Classic Cinemas were taken over by the Cannon Group and the cinema was re-named Cannon. It was closed on 6th October 1989.

Plans were approved for the building to be converted into a church, but this never happened and it became a Lazer-Quest game centre. This closed in 1995, and in 1996, plans were proposed to convert the building into an arts centre. Again, nothing came of this plan, and it became a live music venue. Since June 2007, it has been converted into a pub for the J.D. Wetherspoon chain, known as The Thomas Burke.

A vintage photograph of the Classic Cinema in 1982:
http://www.mawgrim.co.uk/projection/leighc.jpg

Thanks Ken for all the theatres and pictures most of us will never get to see in person with our cameras.