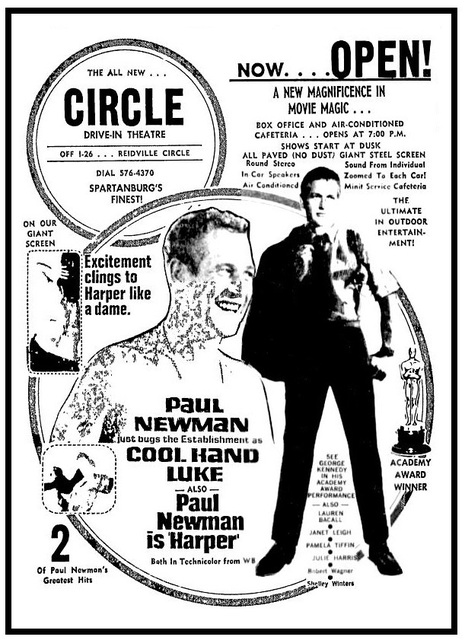 The Circle Drive-In opened on June 27, 1969, featuring Paul Newman in “Cool Hand Luke” and “Harper”. It was owned by Piedmont Productions Inc. of NC and had a parking capacity for 500 cars. Bob Williams was the manager. It was Spartanburg’s last drive-in to open and the most modern of all the Spartanburg area drive-ins. Looking at the movies the drive-in was screening after opening in 1969, it was mostly X-rated movie fare. That ended when the Circle South 29 Drive-In got into trouble for screening X-rated movies in April 1971. After that, both drive-in theatres stopped screening X-rated moves.

On September 9, 1978, the Circle Drive-In was renamed West-View Drive-In. The opening day movie advertisement said it is under new control (maybe it got sold?). The West-View Drive-In screened its last show in October 1982. The drive-in was demolished and is now the home for a BI-LO Shopping Center and CVS Pharmacy.

Oh,AS i told the CT folks when I submitted the Circle Drive-in I was not 100% sure if the name was right; saw it off the interstate heading towards Columbia,S.C. for years.

Thanks again Chuck 1231.Sometimes I feel I shouldn’t even put them on if I am not 100%,but realize guys like you can really help clear up any Questions.

By the way, the Circle Drive-In opened on June 27, 1969. Debut attraction was a Paul Newman double feature of “Cool Hand Luke” and “Harper.”

Chuck…I can understand how you were misled, but the fact is the drive-in you looked up on drive-ins.com is different than the one Rogers submitted. Rogers' submission opened in 1969 and was located on Reidville Circle off I-26, whereas the one you described was built in the 1940s, was located on U.S. 29 Greenville Highway and had previously operated as the Scenic Drive-In.

Slightly off topic, but does anybody know anything about the old drive-at 130 Coastline Road in Spartaburg, just north of US 29? It’s a trailer lot now, but there’s a heavily damamged screen still standing in the corner.

Andy it might be the Scenic drive-in I just submitted it to CT. On Jan 7 1970, The Circle Drive-in was playing “TWO ROSES AND A GOLDEN ROD” and “ON HER BED OF ROSES”.rated R. Wonder where these films end up ?

Glad I found this site!! Maybe I can answer a couple of questions. My father, James Eubanks, was the manager of this theatre from sometime in the 1970’s until it closed in 1982. Tron was the last movie that played there. I can remember taking down the poster from the concession stand. In fact I still have dozens of the posters from that theatre in a storage building…. Various Bruce Lee, Rocky Horror, and many of the live action Disney (Gus the Kicking Mule, Herbie, Apple Dumplin' Gang, etc.).

It was ran under two names while my father was manager…the Circle Drive In and Westview Drive In. I can’t remember the parent company’s name but I remember going with my dad to Charlotte to their home office.

The drive at Coastline and Highway 29 was named South 29 Drive In. It was owned by the same company as the Circle and showed x rated movies. I can remember going over there with my father and him making me lay down in the seat and not look up. We would always go to the office for business related things (payroll, supplies, etc). The manager of South 29 was John Vassey.

I have many great memories of Westview. We had wrestling, live bands, a flea market, carnival, and even a mock witch burning that was for some movie my parents wouldn’t let me watch. I even learned to drive a stick shift on the lot. I must’ve seen Grease and Smoky and the Bandit a hundred times. I realized a new era had started when the Westgate indoor theatre with two screens invited us to come see a movie called Star Wars a day before it opened. Thanks to this website for keeping my childhood alive!!!