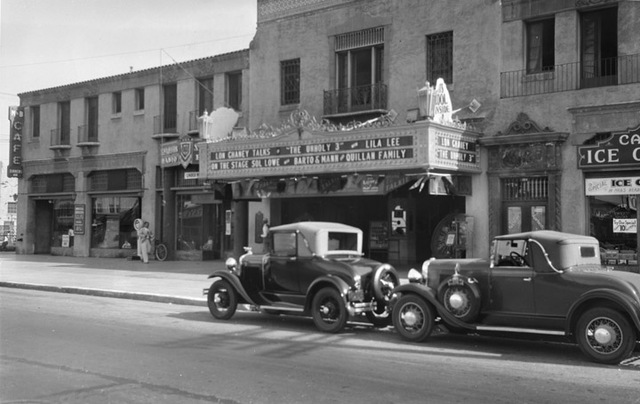 The Manchester Theatre was built for West Coast Theatres and opened on January 20, 1926 with Ben Lyon in “Bluebeard’s Seven Wives” and on stage a Fanchon & Marco revue “Varieties Ideas”. It was located on W. Manchester Boulevard, next to an off-ramp for the Harbor Freeway, approximately three miles east of the Academy Theatre and Fifth Avenue Theatre. By 1950 it was operated by Cabart Theaters Corp.

In the 1960’s the theatre ran exploitation films or films with sensational titles like "Lady In A Cage" (which can be seen on AMC). While I was too young to stupidly drive to this theatre and go inside, I got a good look at the patrons each time we drove by (my parents had friends in the area).

My impression was that, if I had patronized this theatre, I would not have left the auditorium alive. This is the type of theatre that John Waters writes about in his book "Shock Value."

Speaking of the AAA I add this for a few laughs based on fact.

There were three movie theaters: the Manchester, Mayfair, and the Mecca, which was later called the Pix and then the Triple A (AAA). The Mecca also had a bowling alley above it. The thing I remember most about the Mecca theater (which I think was in its Pix phase then) are two pictures we saw there as young boys. The first was Ecstasy, a picture made by Hedy Lamar in Austria in 1933 that was banned in this country because of a ten minute swim in the nude! Somehow in about 1944 or 45 word went around, mouth to mouth among all of the boys in Bret Harte Jr. High School, that it was going to be shown at the Pix, but you had to be 18 years old to get in. My younger brother Gary (he was about ten years old then) and I, along with every other boy in the entire neighbor showed up and when we were asked if we were 18 we answered yes in the deepest voice we could muster. Gary was the last in line but he passed with flying colors and his dime entrance fee. Of course the nude swim was so dark and murky all you could tell was that she didnâ€™t have a bathing suit on, but we all came out saying and thinking that we had just seen our first naked lady. Iâ€™m not sure Mom and Pop knew we saw it or not.
The second picture was a controversial sex education film called â€œMom and Dadâ€ that was only shown to segregated audiences (all boys or all girls) with a nurse in attendance. Again I was still in Bret Harte Jr. High School at the time (I was about 13 or 14). It started with a couple of teenagers on a date and petting in his car. Of course she got pregnant (but you didnâ€™t see how), and thatâ€™s when the educational part started. The next thing you knew you were watching a natural birth, and then a cesarean birth. After that it went in to all kinds of STDâ€™s (sexually transmitted diseases) showing up close photos of live nude body parts (particularly of the male organ) in all states of disrepair. This was accompanied with an audio description of what this disrepair might feel like and what the treatment was to correct the problem if it could be corrected and if it couldnâ€™t be corrected what the final outcome would be!! The latter half is when they needed the nurse for some people! We left that movie swearing an oath to celibacy as we walked out the front door, but only until we encountered the first girl. Proof of the power of hormones over a bank of cerebral knowledge in the cortex of a teenagerâ€™s brain.

The Mecca is already listed, so AAA would be another name, if I understand you correctly. I thought the AAA and the Mecca were separate theaters.

Ken; They were the same theater, just different names as the years went by. The AAA was the last on the totem pole as far as getting first run pictures and if you missed them at other theaters you could eventually see them at the AAA (Mecca or PIX). Spent many a happy hour in the AAA as a young boy.

Here is the location today:
http://tinyurl.com/dbgbqs

Here is part of an LA Times story from April 1933:

Police retaliated yesterday with the capture of one bandit after gunmen had gleaned more than $900 cash in four daring daylight holdups, including two theaters, a woman motorist and a Hollywood travel bureau.

Captured shortly after he and a confederate had taken $200 from the Manchester Theater, 330 West Manchester avenue, a man identified as George H. Putnam, 26, was held by police on a charge of suspicion of robbery.

Putnam was taken into custody a short distance from the theater through the alertness of Salvador Cervantes, janitor, who turned in the alarm after the bandits had bound and gagged manager Perry Morgan and another janitor. Putnam was returning to his parked automobile when he was arrested.

I went to the Manchester Theater all the time as a white teenager. We saw Love Me Tender there which was Elvis' first movie. I grew up at 91st and Vermont and took the bus up the the Manchester and the Triple A theater around the corner all the time in the 50’s-60’s. My black neighbors were not violent. Teenagers fought at all the shows during this period. The Triple A had great kid matinees with cartoons and triple features of course. I loved the Laurel and Hardy movies.

I grew up on 90th and Main (I was born in 1954, a white kid), and went to the Manchester fairly frequently, in the years between the mid-60s and 1972, when we moved from Los Angeles. I was one of those obnoxious little shits sitting up in the balcony making noise.

Even though I was a kid, I remember the beauty of that theater. What a shame it’s gone. I hate the looks of modern theaters.

Click here for an exterior view of the Manchester Theatre in 1930.