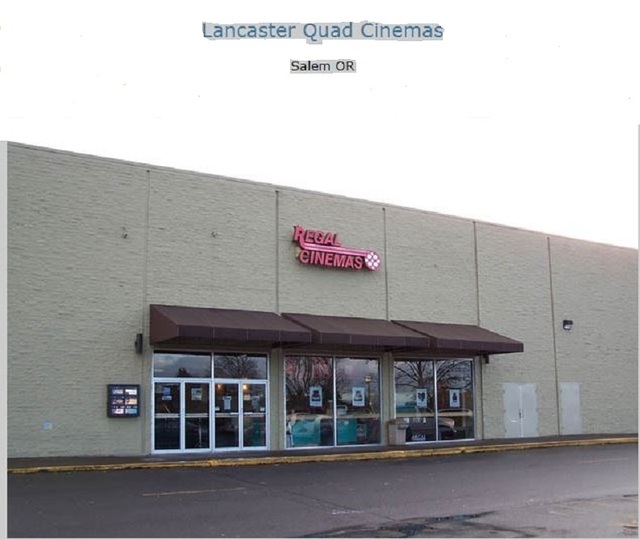 The Lancaster Mall Quad was located in Salem, Oregon It opened on November 24, 1971. A nothing special cinema, just the average size cinemas and screens. It did feature the hit "Jaws" which went on break box office records there and all over the country.

The present address of Lancaster Mall Drive, on the Map goes to Mall Court Northeast, to the end of a Cul de Sac in a residential neighborhood!

Closed and demolished in ~2005 approximate? Anyone care to verify the exact date?

The Lancaster Center Mall launched theatre-less on November 28, 1968. By 1971, an expansion to the slightly renamed Lancaster Mall brought twenty new retailers to the shopping center. One of those was a 740-seat duplex, the Lancaster Mall Theatre at 3790 D. Street N.E. It was the first new-build indoor theatre in more than thirty years in Salem.

The theatre launched as a single screen theatre on November 24, 1971 with Walter Matthau in “Kotch” and “How I Love Thee” with Maureen O'Hara and Jackie Gleason. The theatre announced that a second screen would be added to the operation in 1972. The second screen was known as the South Screen.

General American Theatres Circuit then constructed another four-screen facility of mini-theatre at the Mall opening as the Lancaster Mall Quad Cinema. It launched on January 16, 1975 with “Airport 1975,” and double-features in cinemas 2-4 with “Phantom of the Paradise” and “Alice’s Restaurant”; “The Dove” and “Walkabout”; and “Freebie and the Bean” and “Bullitt.” Salem Theatres closed the two larger theatres opting to run the quad which then passed to Luxury Cinemas.

Originally owned by W.H. Mays and Tom Moyer, and managed by Bob Steffen of Silverton. Per a 1971 auditorium photo I just added courtesy Scott Neff. (Previously operated by: Luxury Theatres, Act III Theatres, Regal Cinemas, Regal Entertainment Group) per the CinemaTour link below. That link also indicates it closed July 28, 2005 and was demolished the same year. CinemaTour however does confirm the 2006 opening of the above mentioned Lancaster Mall Stadium 11.