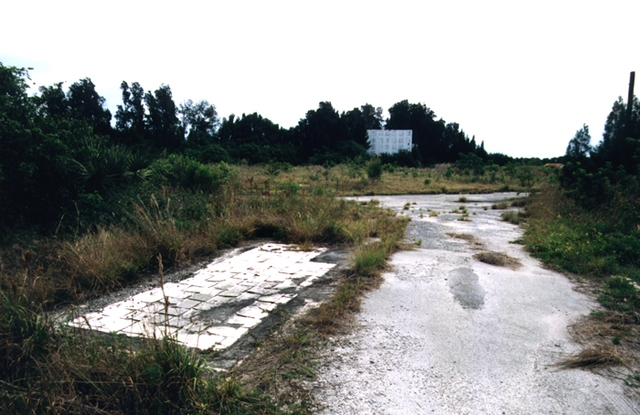 The Fort Pierce Drive-In was opened on January 11, 1949, screening the 1947 comedy/romance “I’ll Be Yours” with Deanna Durbin, Tom Drake and William Bendix. The new airer was opened by Sam D. Bennett & J.R. Leeper. It was reported in June of 1948, that Sunrise Theatre Inc. was going to start construction of their new drive-in theatre on U.S. 1 south of Fort Pierce, FL. Apparently that did not happen and instead they bought the Fort Pierce Drive-In from Sam D. Bennett in December of 1949. It was sold to Rupert N. Koblegard Jr. (dba Sunrise Theatre Inc. and Talgar Theatre Co.) from Jacksonville, FL. Koblegard had formed a partnership with Talgar Theatre Co. from Jacksonville on the ownership and operation of the Fort Pierce Drive-In. The Koblegard family was well known as owners and operators of theatres in Florida.

In November of 1952, Koblegard announced they were remodeling and expanding the parking ramps with an increase of 80 cars which would increase the total to 400 cars. Additional land was acquired from Sam D. Bennett and since they were anticipating a four lane highway was to be built in the future, they changed the entrance, exit and box office. In 1955, Koblegard sold their theatre holdings in Fort Pierce, Stuart, Vero Beach, Cocoa and Melbourne to the First Southeast Corporation. After the sale, the theatres continued to be operated by the Talgar Theatre Company chain. Later in 1960, the First Southeast Corporation sold their theatre holdings which included the Fort Pierce Drive-In and along with the Vero Drive-In, Stuart Drive-In, Angle Road Drive-In, Cocoa Drive-In and Melbourne Drive-In to Frederick H. Kent and T.L. Hyde (dba Kent Theatres) of Jacksonville, FL.

The Fort Pierce Drive-In screened its last movies on February 9, 1986. The lineup was “Weekend Pass”, “The Last American Virgin”, “The First Time” and “My Tutor”. The Fort Pierce Drive-In was the first drive-in theatre to be opened and the last to close of the original six drive-ins that Rupert N. Koblegard Jr owned and operated with the Talgar Theatre Company. Gone are the Vero Drive-In, Stuart Drive-In, Angle Road Drive-In, Cocoa Drive-In and the Melbourne Drive-In. The propery was sold and the drive-in demolished except for the concrete screen tower which is still standing in 2019. A car dealership was built on the property which went out of business. It is now CARite of Fort Pierce car. dealership.

Here is a circa 1991 picture of the marquee, which has since been removed.

The car dealership that replaced most of the theater opened in either late 2004 or early 2005 and had already closed by 2011.

The address listed does not map properly. It should be changed to 3588 US 1.

The above is not mapping correctly. It is mapping south of the drive-in. Approx. location for the drive-in was next door to Dixie’s BBQ at 3362 South U.S. Highway 1. if you look south of this address, you will see the building that was the car dealership and THAT SCREEN!

The correct address is 3410 US-1, Fort Pierce, FL. Currently, the property is occupied by CARite of Fort Pierce. Just on the south edge of the property you can clearly see the screen still standing. http://tinyurl.com/gt3yvel

This drive-in was built in 1948, as noted in the July 3 issue of Boxoffice that year:

“FORT PIERCE, FLA. — Ground has been broken on a 500x650 foot plat for a new drive-in to be operated by Talgar Theatre interests. The company is associated with the Koblegard interests here. Sunrise Engineering Co. will supervise the work. W. W. Hatcher is architect. The franchise has been received from Park Theatres, Inc.

“The project will involve an expenditure of approximately $75,000, and be completed early in September.”